One of the mainly campaigned road message is drivers making sure they have had enough sleep and rest. A driver cannot safeguard the safety of his passengers if he or she hasn't had enough sleep to make him or her focus on the road. It is with this that the Ghana Highways Authority has been vividly campaigning for all drivers whether private or commercial to have rest and sleep well before getting behind the steering wheel.

Residents of Bubiashie was destructed from their peaceful afternoon when a Daewoo Matiz taxi driver lost full control of his car and ended in the Great Bubiashie gutter which is close to the Accents and Arts showroom. Bubiashie is one of the towns within the Accra Metropolitan Assembly and it is one of the developing towns of Accra with several residential apartments.

According to eye witness who saw the dramatic moment as it happened, the driver was totally asleep and not even the loudest noise was able to bring him back until he landed in the gutter. Ata Yeboah who lives near the Bubiashie gutter said, he was on phone chatting with someone when he saw the Daewoo Matiz taxi going dramatically near the gutter. He thought the driver was dodging potholes or something so he didn't pay much attention to it.

The car kept going near the gutter and that was when he knew there was something wrong. We run near the car and saw the driver completely asleep but couldn't go any near and kept shouting so the driver can hear him and wake and steer away but the sleep of the driver was so intense that he was fast into dreamland. He did all he can but the car kept going and it landed straight into the gutter. The car could have even turned over but the narrow nature of the gutter stopped the car from turning.

All tail lights and head lights of the car has been damaged. The beneath of the car is believed to be seriously damaged as it fell from over seven feet into the gutter. According to Ata, the gutter was made to be more than seven feet deep so it can carry enough water when it rains so the car fell over seven feet on ground level before landing in the gutter.

The driver was rescued and was taken to the Faith Evangelical Mission Hospital for treatment. Ghana Fire Service has been called to the scene to rescue the car from the gutter whiles police were yet to be contacted at the time of making this post. 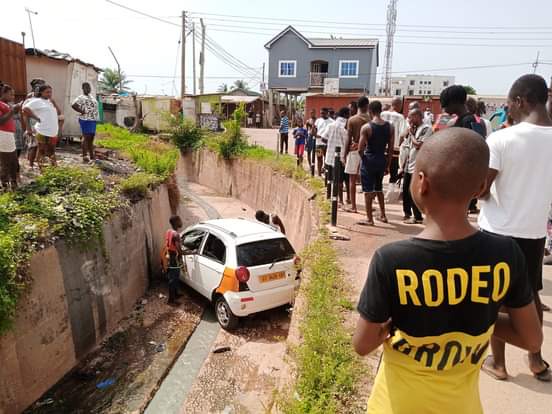 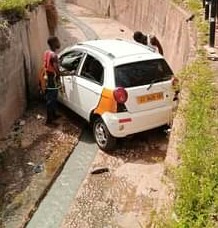 If A Baby Looks Through Their Legs, This Is What It Means