Another Daylight Gunshot In Kumasi

It has not been long since we heard of a day light robbery in Alabar Market in Kumasi involving gunshots, causing injuries to victims at the market. Just this morning, another gunshot incident has occured at Ayeduase near KNUST, also in Kumasi, right in front of the ACCESS bank Ayeduase branch. 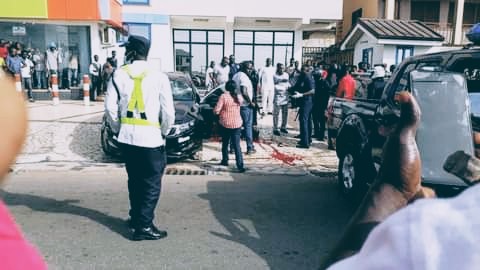 According to eyewitnesses, there was a quarrel between a gentleman and a lady, both drivers of two private cars. A driver of a trotro vehicle got down to defend the lady. As the quarrel heated up, the gentleman who owned the private car took out his gun and shot the trotro driver to death.

On realizing what he had done, and mob that were gathering towards him in anger, he rushed into his car and locked it. He tried to escape but he was unable to, since other drivers had blocked the road. Moments later the police arrived on the scene.

The gentleman knowing the kind of trouble he had found himself in, shot himself also to death. Things are really getting out of hand in this country, people taking the law into their hands and doing whatever they like.

This incident and others which have occured will definitely bring fear to people in the area. We therefore plead on Security personnel to take action to avoid such instances especially in this election period.

My Parents Used To Lock Me Inside The House, They Stopped Me From Playing With Other Kids – Maria