By Christopher Sededzi Kwame (self media writer) | 2 months ago 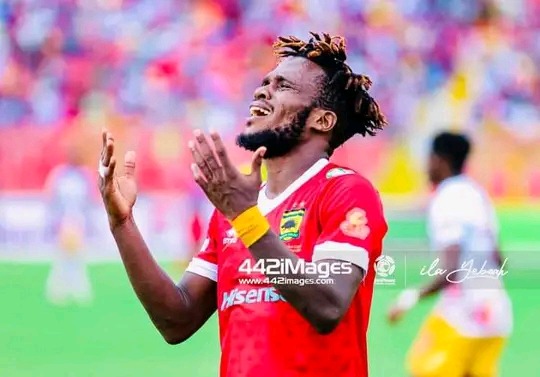 The Royals denied the Porcupine Warriors from going top of the League table after the 1-1 draw.

With a win over the Royals to jump to the top of the league table, Asante Kotoko, from the blast of the ref's whistle, gave no chance to Legon Cities to find their rhythm in the game.

The Ugandan sharpshooter was hauled down in the area and earned a penalty, which he converted expertly to give the home team the lead at halftime despite the Porcupine Warriors not creating many chances to score.

The Royals devised a plan after halftime that gave them a goal and executed flawlessly. In the 50th minute, Mohammed Sadat broke through Asante Kotoko's defence to score the equaliser.

Aduana Stars took the lead in the game's 43rd minute when Bright Adjie broke the tie.

Berekum Mezack Afriyei of Chelsea swiftly equalised the score in the 45th minute, forcing a one-all tie at halftime.

After the halftime break, Bright Agyie came back to increase the lead for the home team, giving them the three maximum points.

At the Theatre of Dream in Dawu, Dreams FC was in disbelief after defeating the Hunters despite being down a goal. In the 35th minute, Agyenim Boateng of the Still Believe team broke the stalemate. Kofi Agbesimah scored the game-tying penalty kick nine minutes after putting the ball in Bechem United's goal. In order to complete Bechem United's comeback in Dawu, Emmanuel Avornyo doubled the Hunters' goal.

Karela United were humbled at home by King Faisal. After a goalless draw at halftime, King Faisal returned from the half-time break to break the game's tie through Joseph Adu Dwomoh, the only goal of the game, and have given King Faisal two straight wins in the season.

At the Duns park in Bibiani, Medeama SC managed to earn a point after going four games without a victory. Kwesi Donsu of the Maeuve and Yellow team gave his side the early advantage in the 13th minute, but Ibrahim Laar of the Bibiani Gold Stars team helped his team come back and tie the score in the 39th minute. 1-1 was the final score.

Accra After losing 0-2 at home to Legon Cities, Great Olympics are back on the winning track. After David Abagna had broken the stalemate in the 11th minute, Great Olympics scored their first goal through Raymond Oko Gripmann in the 17th minute. At the Accra Sports Stadium, Amos Achempong doubled the team's advantage and scored the game-winning goal.

Elsewhere in Sunyani, the battle of the two betPawa Premier League, newly promoted, ended in a 1-0 win for the host Nsoatreman FC. Ten-man Tamale City couldn't hold the host as Collins Boateng's sending off affected them; Nsoatreman took advantage to clinch the maximum three points through Baba Mahama's lone goal in the 68th minute.

The game between Kotoku Royals and Samartex 1996 ended abruptly.

Accra Sports Stadium will host Accra Hearts of Oak vs. Accra Lions in the final matchup of week seven of the betPawa PremierLeague