Sturm Graz are finally back to where they have been back in the late 1990s when they almost regularly featured the group stages of the UEFA Champions League.

The Austrian heavyweights have failed to qualify for any European competition (group phase) since 2011/12 when they were only passengers in the UEFA Europa League group with Lokomotiv Moscow, AEK Athens, and Anderlecht.

Nevertheless, Sturm Graz returned with an appearance in the Europa League group stage last year when they failed to do much besides the likes of Monaco, Real Sociedad, and PSV Eindhoven.

Sturm finished the last season in the Austrian Bundesliga as runners-up and they are hoping to reach the Champions League groups this time around.

The team led by Christian Ilzer fell 1-0 to Ukrainian runners-up Dynamo Kyiv in the last week’s first leg on the neutral venue in Poland (Dynamo Kyiv were the nominal hosts).

However, it is worth noting that the Austrian conceded the only goal of the match from Dynamo Kyiv’s lone attempt on target on the occasion.

The hosts will now be looking to annul the one-goal deficit this Tuesday when the Ukrainians come to visit Merkur Arena.

Sturm Graz showed strength once again in the second round of Austrian Bundesliga, beating champions Salzburg 2-1 on the home turf and thus announcing a strong push for the domestic title.

Dynamo Kyiv were big underdogs in the previous round against Fenerbahce but they found a way to advance 1-2 on aggregate thanks to the extra-time goal in Istanbul.

However, the Ukrainians did not show much in the final third six days ago against Sturm Graz and we would not be surprised to witness a clean-sheet win for the hosts here.

We also have to mention young talented striker Rasmus Hojlund (19-year-old) who completed a brace in Sturm Graz’s win over Salzburg in Bundesliga. He is worth backing as the anytime goalscorer here. Anyways, the home win is paid at the 2.25 odds. 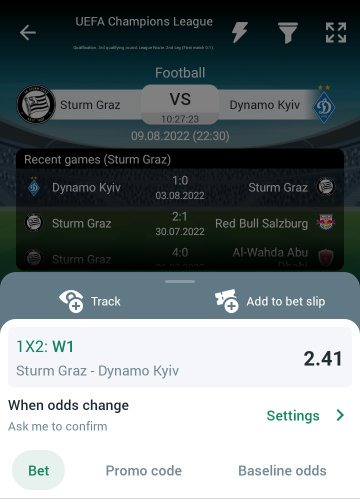