By Champion6 (self meida writer) | 1 months 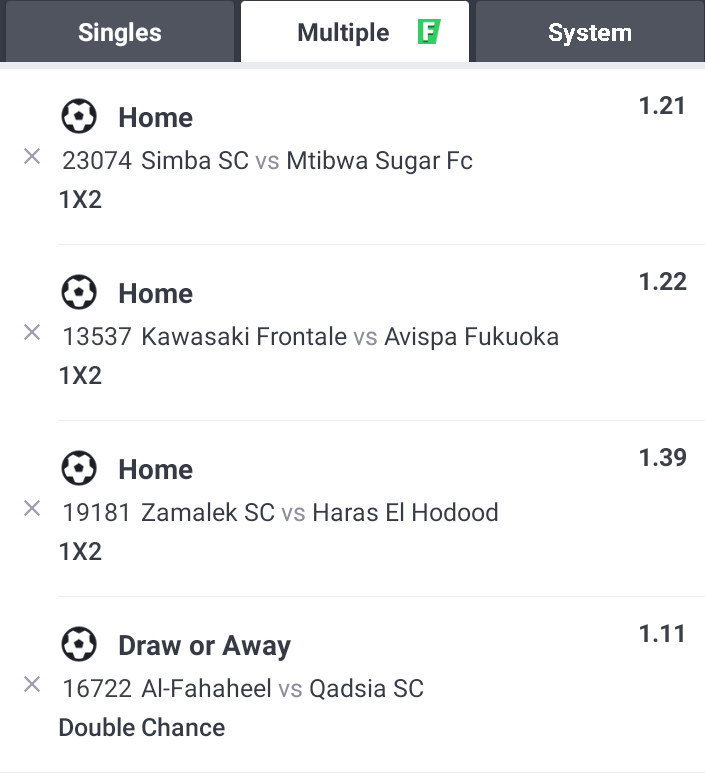 Simbar SC is a well known Africa Champion League team with lots of experience. Though they have played 4 and 5 less matches than the fist and second teams respectively in the Tanzania Premier League, they are third with 46 points and 37 goals. Mtibwa Sugar on the other hand have 23 points with -9 goals after 23 matches. In the last 10matches between the two sides Simbar has won 7 and 3 draws. In Mtibwa Sugar previous 7 league matches, they have drawn 2 and lost 5.

My prediction: Win for Simbar SC

My predictions: Win for Kawasaki Frontale

Though this is not a league match but a cup match, both teams play in the Egyptian Premier League. El Zamalek's 4-1 and 0-2 wins against Teungueth FC and MC Alger respectively in the Africa Champions League shows their good form and high quality this season. With El Hodood's struggling nature this season, El Zamalek stands favourites to win tonight. In the last 10 meetings betweens the two clubs, El Zamalek has won 8, 1 draw and 1 win for El Hodood.

My prediction: Win for El Zamalek

This is a game in the 10 team Kuwait Premier League. Al Fahaheel has hardly won matches after playing 9 league game this season. After 9 matches, Al Fahaheel has won only 1, drawn 3 and lost 5 amassing only 6 points and -9 goals. Al-Qadsia is just the opposite side of Al Fahaheel's records in the ongoing league. In the 9 matches, Al-Qadsia has lost 1, drawn 3 and won 5 and lie second on the Kuwait league table. Al-Qadsia has won all previous 10 matches between the two since 2014. This match should have been a straight win for Al-Qadsia but with Al-Fahaheel playing home, let's be a bit cautious.

My prediction: Win or Draw for Al-Qadsia

Content created and supplied by: Champion6 (via Opera News )