The fixtures for the 2022/23 betPawa Ghana Premier League, GPL campaign, will be released on Thursday, August 11, 2022, it has been announced.

The Ghana Football Association, (GFA) will make known who plays who and where the first week action will be on Thursday in the capital.

Asante Kotoko are the defending champions after winning last season's championship by a mile ahead of Medeama SC who finished second with Bechem United, Karela United Great Olympics and Accra Hearts of Oak placing in that order on the table. 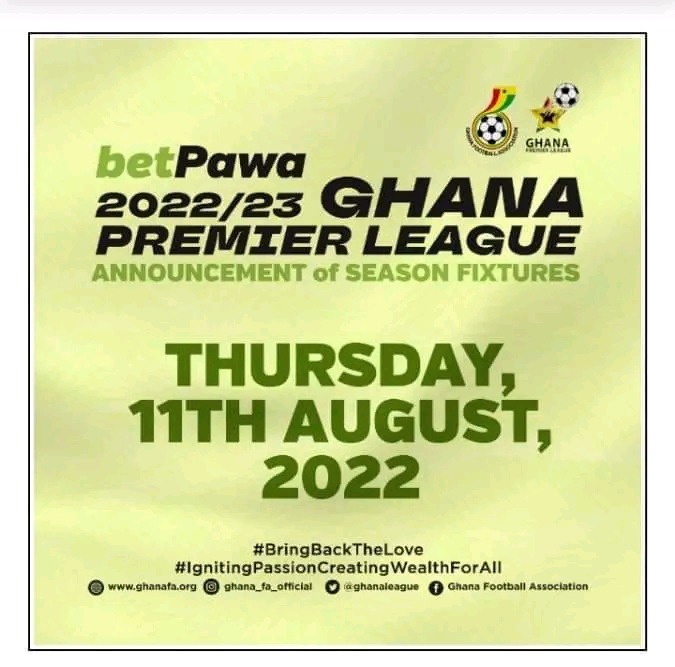 According to the program released by the GFA for the upcoming campaign, the season will commence on the weekend of September 9-12 with the first week matches to be played between Friday and Monday.

Prior to the opening fixtures, league champions Asante Kotoko will take on the FA Cup winners Accra Hearts of Oak in the Super Cup contest on Sunday, September 4 at the Baba Yara Stadium in Kumasi.

This game, will officially usher in the GPL campaign of 2022/23 which by all indications, promises to be tough on all fronts.

Four teams, Nsoatreman FC, Tamale City FC, FC Samartex and Kotoku Royals will all be making their debut in the GPL next season after gaining promotion from the DOL leagues.

The season will take a break for Ghana's participation in the FIFA World Cup in Qatar in November and December this year.