Building a house in Ghana is very difficult and to get a land in Accra makes the situation more complex but in this article, I am going to provide simple steps for people who are earning a salary between 1000 to 2000 cedis to build a two bedroom house. First of all, buying one plot of land in Accra will cost you 30,000 Ghana cedis and this land will certainly be far away from the developed areas whiles buying a land in pampram will cost you 16,000 Ghana cedis, so we will consider buying a land in pampram, where we are going to build our two bedroom self contain on a budget of earning between 1000 cedis to 2000 cedis monthly, as we are beginning this journey I will illustrate the earner of 1,500 cedis man as kofi in this article, which simply implies that kofi is a monthly worker who earns 1,500 cedis from the company he is working but if you are earning less than 1,500 cedis but more than 1000 cedis you will have to cut down your expenditure just to save enough money similar to what kofi who is earning 1,500 cedis will be saving to build a two bedroom house within the next four years or you can also decide not save the amount of money kofi who is earning 1,500 cedis will save but instead you can increase the number of years you will use in building your own two bedroom house beyond the number of years kofi who is earning 1,500 cedis is going to use to build his 2 bedroom house in this article, similar situation also applies to anyone reading this article who earns above 1,500 cedis, it means you the person earning above 1,500 cedis can also increase your savings above what kofi who is earning 1,500 cedis will be saving to build his house in the next four years and build yours at a faster pace.

Building a two bedroom house on a monthly salary of 1,500 cedis: this means that you will have to make a lot of sacrificing to save enough money for your building. So let’s assume the year is 2021 and we are going to start saving for the next four years to build a two-bedroom house self contain, to do this we start by calculating our transport expenditure from our salary and I am going to illustrate the transportation cost of Kofi, here Kofi is a single guy who is not married or dating and has already secured a single room for himself for the next four years so he is not going to use his salary to renew his rent again but if unfortunately, you must renew your rent within the next four years then, at the end of the article you would have to consider some expenditure that you made which Kofi didn’t make.

Here is a breakdown of how Kofi saved 1000 cedis from his monthly salary of 1,500 cedis for six months to buy a land: Kofi stays at ablekuma and works at lapaz and his transport to work from Monday to Friday in a month cost 120 cedis, he spends 5 cedis on food at work which amounts to 100 cedis in a month, therefore Kofi spends 220 cedis on food and transport and still has 1,280 cedis left, he, therefore, decided to save 1000 cedis and he was left with 280, he decided to buy some foodstuff down so that he can cook some food for supper when he returns from work.

Kofi buys foodstuff and stock them for cooking in the evening with 100 cedis: After Kofi expenditure on food at work and transport to work cost him 220 cedis, he decided to buy foodstuff down so that he can prepare food when he comes back from work and also cook on weekends, so he decided to buy a small bag of aroma rice for 33 cedis, a frytol bottle for 10 cedis, a create of egg for 18 cedis, 10 tin tomatoes for 30 cedis which when put together will all cost 91 cedis.

A breakdown of Kofi’s monthly expenditure from his 1,500 cedis monthly salary, spent on food at work, transport, food cooked for dinner, and monthly savings for land: Kofi earns 1,500 cedis monthly and for him to buy a land and start building a 2 bedroom house in a space of four years, he decided to spend 120 cedis on transport, 100 cedis on food at work, 91 cedis spent on foodstuff bought for cooking in the evening and 1000 cedis monthly savings, after this expenditure Kofi will be left with 189 cedis, which he can spend on all other things which might not be included here but will probably be spent on his girlfriend. Kofi won’t cook rice all the time when he is back from work, but it is good he bought a bag of rice which will help him save money and also have a variety of food to cook next month should in case he decides to cook another food.

Laying the Foundation of two bedrooms: Getting four boys to dig the foundation of a two-bedroom house is appropriate and in estimates, they can take three days in doing that job and each person will charge 70 cedis per day which means you will have to get 840 cedis ready for your foundation of a two-bedroom house. Now after your foundation is ready the next thing to do is to buy blocks, stones, sand, iron rods, and cement to commence the concrete work. Buying a heap of sand will cost you 1,200 cedis including the delivering of the sand to your building site, the next step is buying stones and with 600 cedis you will get a heap of stones ready for the concrete work, after this, we will buy 500 blocks to lay the foundation and 7 bags of cement to lay the foundation block and fill the foundation with concrete and this job will be done by four boys with each person charging 100 cedis per day for three days. The next step on the building is raising the blocks to the window level.

Calculating our expenses used in laying the foundation before we raise the blocks to the window level: An amount of 840 cedis has been used to pay the four boys who dug the foundation of the two-bedroom house for three days, Kofi ordered a heap of sand delivered to our site at 1,200 cedis, stones were bought for 600 cedis, the 500 blocks to lay the foundation will cost is 1,500 cedis, and 7 bags of cement will cost kofi 245 cedis which means an amount of 4,385 cedis.

The next step on the two-bedroom house is raising the blocks to the window level but Kofi has to save money for this: Kofi is going to start this project from 1st July 2022, because he saved from the previous months, July 2021 to 1st January 2022 was used to save money for the laying of the foundation, and money saved from 1st January 2022 to July 2022 will be used for raising the building to window level, Kofi is going to raise the two-bedroom house to the window level with a bank account balance of 7,615 cedis with 6000 cedis of the money coming from his saving from February 2021 to July 2021 and the remaining balance coming from the amount he was left in his bank account after laying the foundation of the building with a savings he did from, having already spent 4,345 cedis on laying the foundation alone. A block in Ghana costs 3 cedis and raising a two-bedroom house to the window level without feeling the inside of the house with concrete will demand about 1000 blocks and one block cost 3 cedis which means we are paying 3000 cedis for the thousand blocks. Working with four boys to raise the building with blocks to the window level of a four-bedroom house will require a maximum of 5 days with a salary of 400 cedis for all the four boys each day meaning they will take 2,000 cedis for the 5 days, also Kofi will need 10 bags of cement to do this job.

Why the roofing of some buildings cost and why kofi wont follow such steps: in this article I am going to tell you why some roofings cost and the reason why kofi who is on a monthly salary of 1,500 cedis will not follow such footsteps, first of all we are in accra and a lot of architect will like to sway you with their roofing designs which comes at a highly priced tag but if you are willing to roof your building without spending a lot of money on it, then I will advice you not to hire a company who roofs buildings and charge after roofing but instead go into your neighborhood and gather some carpenters and go with them to do the estimate on your building, after that you can go with them to buy the materials for the roofing, after getting the materials, look for good carpenters to roof your building for you and that is what kofi is going to do so that he wont incur much depth in roofing his two bedroom and with an estimate of 12,000 cedis which he saved from 1st January 2023 to 1st December 2023 he can get his two bedroom roofed.

1st January 2024, Kofi has roofed his build, the savings from February 2024 to December 2024 will be used on wiring, and plastering: the building is not easy but if you had followed this article you would have learned a lot form how savings would give you a two-bedroom house in the space of four years, Kofi's building will have enough money to plaster the house and also do wiring, the next job on the house will be plumbing and interior design.

1st January 2025, Kofi is going to save for the next ten months to complete the interior design and furnishing of his house: In conclusion, it can be seen that putting up a building involve a lot of sacrifice but if you are earning a monthly income of 1,500 cedis and you cultivate the act of saving you will have a good house in 2025, if only you will begin saving for your two-bedroom house from January 2021. Thank you, please follow this account for more content like this. 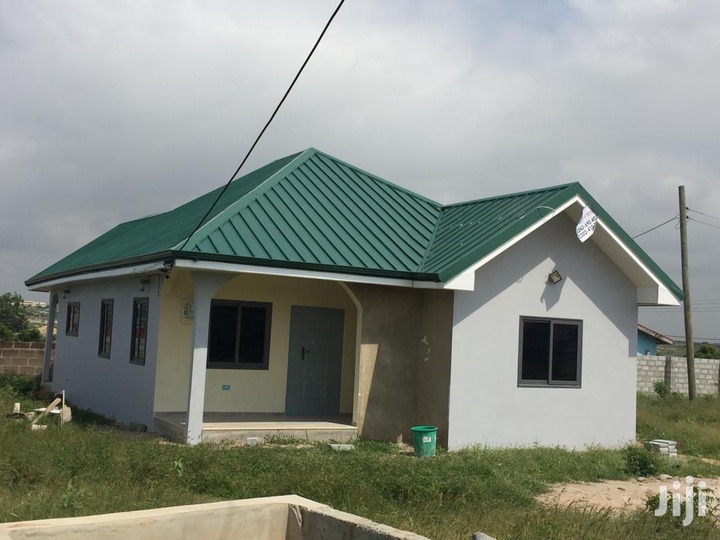 Content created and supplied by: Obedkrampah (via Opera News )

Accra Ghana
Opera News is a free to use platform and the views and opinions expressed herein are solely those of the author and do not represent, reflect or express the views of Opera News. Any/all written content and images displayed are provided by the blogger/author, appear herein as submitted by the blogger/author and are unedited by Opera News. Opera News does not consent to nor does it condone the posting of any content that violates the rights (including the copyrights) of any third party, nor content that may malign, inter alia, any religion, ethnic group, organization, gender, company, or individual. Opera News furthermore does not condone the use of our platform for the purposes encouraging/endorsing hate speech, violation of human rights and/or utterances of a defamatory nature. If the content contained herein violates any of your rights, including those of copyright, and/or violates any the above mentioned factors, you are requested to immediately notify us using via the following email address operanews-external(at)opera.com and/or report the article using the available reporting functionality built into our Platform