5 Signs Someone is Fake Rich

By InfoLab (self meida writer) | 20 days

This article is about poor people who’re trying to look rich and by doing so self-sabotaging their real chances of achieving financial success. You've seen them at parties or on social media. I can assume perfectly well you know at least one of such people despite their bank accounts disagreeing with their attitudes. These fake rich people are all around us and they’re not unidentifiable. Below are five solid signs someone is fake rich. 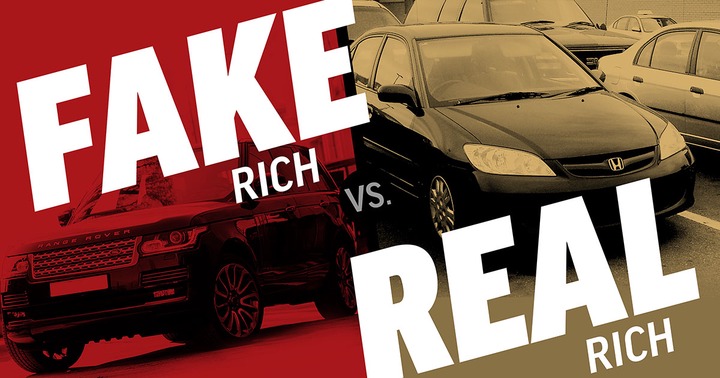 1. All They Talk About Is Money

The fake rich are actually boring to talk to because there's very little that they talk about. Their lives revolve around the possibility of money, they speak of their own financial successes like it's a given but would gladly throw everything away to join you if you told them you were actually making more than them. You surely know someone like this; a person who first mentions the price tag of an item and then tells you why they purchased it. They talk about how they're going to make money, about how they spend money and the price of things. Nothing beyond that because there isn't anything else to them that would be worth sharing.

2. They Brag About Their Plans

The fake rich will almost always mention how they're working on something new that has great potential. They always plan things but never put the work in to be consistent about it. To put it in simple terms, even if they had a good idea, they'll never make it because they lack the discipline to make it happen. The fake rich are all talk and no work.

3. They Don't Have a Savings

The fake rich never have any money saved. Every single cedi coming in is used to invest in their image and the way people perceive them. Having money put aside for dark days or new opportunities is necessary. It's probably one of the biggest differences in behaviour between the rich and the poor. The wannabes are inconsistent and never know what to do with the money.

4. They Care More about the Brand Perception than the Quality

They're not below buying fake products and try to pass them off as genuine. That's easy, if you see someone rocking fakes, you don't need to look any further. Those aren't even fake rich, those are just wannabes. The fake rich will own designer pieces but try to sneak in a fake in the package hoping people won't notice. For the fake rich it's all about the brand, it doesn't matter if the quality is as poor as it gets. The bigger the logo, the happier they are.

5. They're in Constant Need of Validation

The fake rich are in constant need of other people's approval. They thrive on what other people think of them and live for the feedback awesome people show them. Everything they do has the sole purpose of impressing those they perceive to be less than them. They spend more time trying to be perceived as successful rather than actually putting in the work to become successful.

The goal is to be rich, not to look rich. And your actions should always come from a place of growth, that's how you escape poverty and actually become rich.