By Original_News1 (self meida writer) | 17 days 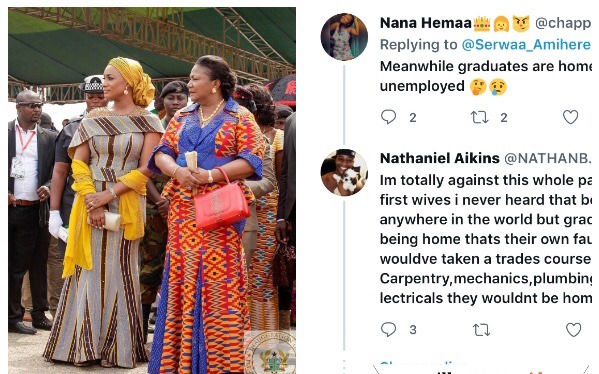 Few days ago, Parliament approved formalization of the payment of salaries to the First and Second Ladies. Thus the spouses of the President and Vice President respectively. This have come hard at Ghanaians and have many to voice out their opinions on the matter.

In reference to social media, there is a form of division based on the thoughts shared by people. Whilst some people see this as unnecessary and waste of resources, others are support since the First and Second ladies perform certain duties in the country.

The spouses of the President and Vice President are sometimes on national duties such as inauguration of buildings, being representative of government at certain events and more.

There have also been circumstances where Ghana have been compared with some developed country particularly the USA, where salary is never paid to the First Lady because her position wasn’t through election or due to the fact that she wasn’t elected by the citizens.

On the other hand, some feel It's not a new thing as they are trying to just bring it to book, thus make it official and legal. And that it has been paid since President Kuffour time.

Many have critics this government on so many issues and this has been one of the headache for Ghanaians these past few days.

﻿Television personality, Serwaa Amihere in a post of twitter tried to find out the opinions of Ghanaians in relation to this salary brouhaha. In response to that many have shared their thoughts. These includes;

“Who the cap fit, let them wear it, abi we voted 4more to do more? by next year their children will start receiving salaries as first and second children of the country. Let me remind y'all that it left 3more to cry more. 🤣🤣🤣🤣”

“In reality...the first and second ladies perform far better than the so called ministers. I see nothing wrong with payment”.

NABCO trainees haven't been for close to 5 months, people are striving to make ends meet. The country complain of high debts yet there is enough money to pay salaries of First and Second Ladies, and buy new cars for MPs. Is this really right ?

Aside the ordinary citizens who are against this, the Minority in Parliament have also added their voice and ready to take the matter to the Supreme Court.

The First and Second lady both foundations that generate some sort of income for them. Many Ghanaians are very furious about this but well they should know their salaries or allowances have been paid since as they even backdated it to 2017.