By Kwhabena (self media writer) | 1 month ago 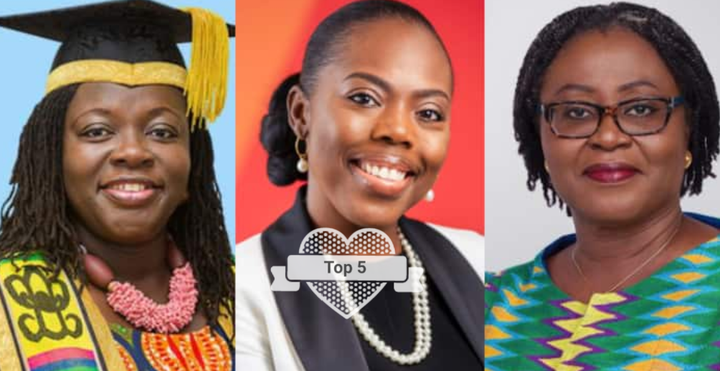 Most well-known organizations and institutions have men as CEOs or managers, with fewer women in prominent positions in Ghana's corporate and intellectual sector.

While this is improving, Kathy Caprino, a women's job success coach and president of Ellia Communications, Inc., says that when we think of "boss," we automatically and unconsciously think of a male picture. There are several reasons why more men are in charge of most organizations or institutions, including age-old sexism - in some professions, a lack of women with the needed skills is the cause of female absence.

The concept of women as leaders needs to be normalized by training more women in fields that were once thought to be exclusively male, particularly in Science, Technology, Engineering, and Mathematics (STEM).

Organizations must also be deliberate in their efforts to promote women to positions of power. The following is a list of five Ghanaian women who have recently been appointed to high-level positions in Ghana and elsewhere.

1. Professor Dorothy Yeboah-Manu, a microbiologist, was the first woman to be named Director of the Noguchi Memorial Institute for Medical Research (NMIMR). She was previously the Deputy Centre Leader at the West African Centre for Cell Biology of Infectious Pathogens.

2. Professor Nana Aba Appiah Amfo made history when she was appointed as the University of Ghana's first substantive Vice-Chancellor. The prestigious university's Governing Council appointed the renowned Ghanaian Linguistics professor. The appointment began on Tuesday, October 26, 2021.

4. Abena Osei-Poku: was recently appointed Chairperson of the Ghana Stock Exchange (GSE) council. After Gloria Nikoi, she is the second female to hold that position in the last 26 years.

5. Martha Ama Akyaa Pobee was appointed as the Assistant Secretary-General of the United Nations for the entire African continent. Martha's appointment was made official on May 21, 2021, according to Ben Dotsei Malor, Chief Editor for Dailies, UN News at the United Nations.

A Ghanaian woman has become the country's first female neurosurgeon. Meanwhile, Dr. Mabel Banson of the Korle-Bu Teaching Hospital's Neurosurgery Unit, Department of Surgery, has become Ghana's first female neurosurgeon. She joins the ranks of Ghanaian women such as Professor Nana Aba Appiah Amfo, who was recently appointed as the University of Ghana's first substantive Vice-Chancellor.

Content created and supplied by: Kwhabena (via Opera News )

Use the mixture of garlic and milk to treat this health problems.