By Cecey (self meida writer) | 1 months 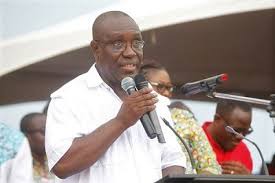 The organized labour of Ghana has come out to explain why it accepted the 4% and 7% increment in the basic salary of public workers for the year 2021 and 2022 respectively. This occurred when the general secretary of the TUC, Dr. Anthony Yaw Baah addressed the media in a press conference held at the GNAT hall on Monday, 26th of July, 2021.

According to Mr. Yaw Baah, the organized labour accepted the government’s proposal of 4% and 7% base salary increment for 2021 and 2022 because of certain factors that were considered. He made mention of how the Covid-19 pandemic has affected the economy of Ghana and how people lost their jobs and businesses through the pandemic.

‘’ Evidence available indicated that further increases might lead to redundancy in the public service. We had to avoid redundancy, by all means, because of the negative social and economic effects of the mass redundancies we witnessed in the 1990s, as part of the structural adjustment programme. We have also witnessed redundancy of tens of thousands of workers in the private sector due to the Covid-19 pandemic.

Another reason was that we wanted to avoid the payment of Cost-of-Living Allowance (COLA). You may recall that in 2014, when the economy of Ghana was in crisis, government argued that it could not increase Base Pay so we accepted COLA of 10%. Workers’ contribution to social security remained at 2013 levels the whole of 2014. In 2015, we proposed 25% increase in Base Pay. Finally, government offered 13% and we accepted it, after months of negotiations. But as public sector workers may remember, the 13% increase was based on the 2013 Base Pay excluding the 10% COLA. Therefore, effectively, public sector workers received just three percentage point increase over their 2014 salaries”, he said.

Meanwhile, three teacher unions including NAGRAT and GNAT have rejected the 4% increment of basic salary of public sector workers for the year 2021.

Guys, is she keeping you waiting? Here are 8 signs she is Checking you before giving you her heart