Flashback: The Time Mahama Used 10% Of His Salary For The Construction Of Chips Compounds.

By Giinagh.com (self meida writer) | 15 days

In the wake of Akufo-Addo and his Government increasing their salaries by 61% and even paying their first and second ladies salaries equivalent to Cabinet minister despite the current hardship, COVI-19, and addition of 9 new taxes, many people have been wondering what John Mahama did differently from Akufo-Addo when Ghana was facing economic hardship like today.

According to a report by Star FM which detailed some of the things Mahama did to help Ghanaians during his time.

A former Schedule Officer at the Flagstaff House Emelia Arthur has dismissed claims that monies accrued from a 10 percent pay cut ordered by former president John Dramani Mahama in 2014 cannot be traced.

The deputy Controller and Accountant General told Parliament’s Public Accounts Committee that the 10% salary cut policy which affected Mr. Mahama, his deputy and all appointees, could not be traced

The voluntary austerity move was announced by the Mahama administration in the 2014 State of the Nation Address.

The pay cut summed up to a total of GHS2.5million at the end of December 2016.

The amount was deposited in a special account recommended by the former president to be used for the construction of Community-based Health Planning and Services compounds popularly known as CHPS compounds.

Deputy Controller and Accountant General Kwesi Owusu said former Chief of Staff Julius Debrah per a letter ordered the transfer of the amount in 2014.

But in a response, Madam Arthur stated that all the monies accrued were used for the construction of 12 CHPS compounds dotted across the country.

She revealed that only one out of the 12 was abandoned before they left office in 2016 because there wasn’t enough funds to complete it.

“As at the time we were leaving office, 12 of such facilities were in place. It was our private money, money from the president, Chief of Staff, ministers and all appointees…we ensured that we went through the formal procedures of allotting contracts [for the CHPS compounds].

“All these facilities are there and verifiable and you can send your people to go and check…it is rather interesting we are hearing what we are hearing,” Arthur told Morning Starr host Francis Abban Thursday.

According to Arthur, two of the CHPS compounds were in Upper Denkyira, Afram Plains North had 3 Afram Plains South had 3, Greater Accra had 2 and the rest in Volta region.

She added that instead of demonizing and peddling rumours about how the monies were utilized, the former President and his appointees should be hailed for their act of kindness.

“We should be applauding his Excellency the president and the Chief of Staff who decided to put 10 percent of their salaries away…this was our private money and we used it to build 11 CHPS compounds.” 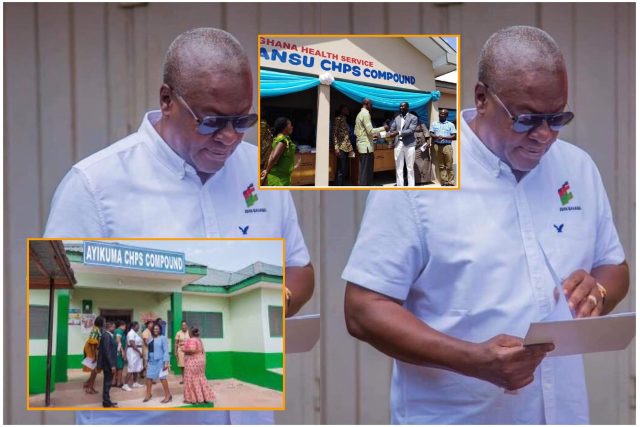