By BigKwadjo (self meida writer) | 19 days

Manasseh Azure Awuni is a household name in Ghana and most recently, was working primarily as a freelance investigative journalist, have landed a well paying work, after having won several awards also as an anti-corruption campaigner and has over the years investigated high level corruption and scandals that have resulted in shaping policy, saving and retrieving hundreds of millions of cedis and imprisonment of some offenders.

Well, many recall his sudden resignation from the Multimedia Group, as a senior Broadcast Journalist following this, but from latest revelations from his own Facebook page, he may not be a freelance journalist now, as he heads a media project by the renowned Media Foundation for West Africa (MFWA), a group he has severally been awarded by. Manasseh Azure has won many awards including, Ghana’s Most Promising Journalist of the Year for 2010, Best Journalist of the Year for 2011 and the 2017 Best Investigative Journalist at the maiden West Africa Media Excellence Award. In 2017, his investigative series titled “Robbing the Assemblies” led to the cancellation of a $74 million government contract for the supply of waste bins, as the investigation found out that the ministry did not need the bins it was procuring and that the contract sum had been inflated by at least $31million. That story and others in the series won him the Best Anti-Corruption Reporter and Overall Best Journalist at the 2018 West Africa Media Excellence Award organized by the Media Foundation for West Africa.

The program dubbed The Fourth Estate is a non-profit, public interest and accountability investigative journalism project of the Media Foundation for West Africa (MFWA), with the aim to promote independent and critical research-based journalism that holds those in power answerable to the people they govern.

According to its website, "Our focus is the fight against corruption, especially in the public sector. The project, which is based in Ghana, prioritizes quality investigative and in-depth reporting in the areas of governance, environment, health and human rights. We aim to promote transparency, accountability and due process in these areas through independent, in-depth journalism. We also aim to routinely highlight critical issues affecting people’s lives, shape public policy, empower people and restore public trust and confidence in journalism. The Fourth Estate is a response to state actors’ ever-tightening noose around the neck of critical journalism, which robs them of the freedom to freely carry out their watchdog role. Economic and other considerations also undermine the media’s watchdog role of holding the government accountable to the people, an unfortunate development which causes public confidence in the media to wane."

The well funded project which literally means that, award winning journalist Manasseh Azure will be paid well eventually, cites an Afrobarometer report published on May 2, 2019, which revealed that even though media freedom was on the decline in Africa as a whole, the situation in West Africa was particularly worrying, as the report noted that compared with other regions on the continent, public support for media freedom was lowest in West Africa, the only region where the majority of the public (57%) said they would support media censorships by governments, as a baseline inspiration for starting this media project. 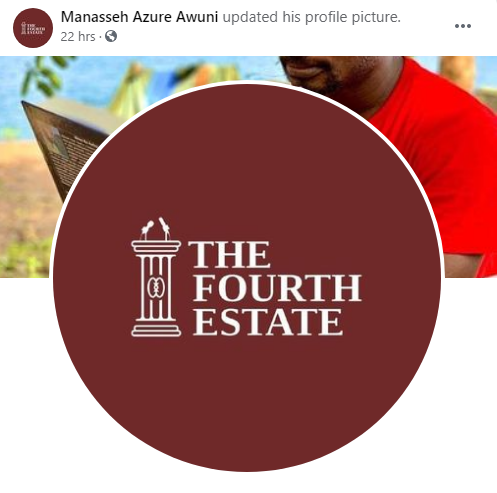 The Project is funded through grants received by the MFWA as part of its media and good governance programme. Thus, the projects newsroom, headed by Manasseh Azure is completely insulated from any possible control by government and/or commercial interests because we do not depend on government or commercial entities for advertising or other sources of funding.

Manasseh Azure's media practice and fight against corruption, has not been easy, as he has severally been threatened even with deaths. Most recently just after the just ended general elections, the investigative journalist, Manasseh Azure Awuni, had received a fresh death threat after he published an article on the outcome of the 2020 elections. Manasseh had disclosed the latest threat on his life on Newsfile, which among others discussed corruption and media freedom in the year 2020.

He had alleged that, the death threat was sent in an email to him on Christmas Day, a day after an article headlined, ‘ERRORtoral Commission and Akufo-Addo’s coup d’état’, was published and went viral, where he had discussed the anomalies with the Techiman South parliamentary results and the denial of the people of Santrokfi, Akpafu, Lolobi and Likpe (SALL) areas.

This is not the first time the award-winning journalist has received death threats, as in 2017 also, he had reported a death threat to the CID Headquarters, which was later referred to the Cyber Security Unit of the Ghana Police Service. That threat was in the form of a text message. Again in 2019, Manasseh had to temporarily relocate to South Africa following threats against his life after Manasseh and Joy FM had then aired a documentary titled "Militia in the heart of the nation" which detailed how a private and unlicensed security group affiliated to the governing NPP operated from the Osu Castle, but the government denied the story. The group, De-Eye also sued Manasseh and the media house, but however abandoned the suit when Manasseh and the Multimedia Group filed their defense, something he has won in similar defamation suits against those he has investigated in the past. Manasseh has always however acknowledged and is forever grateful to the then National Security Minister, Albert Kan-Dapaah, who had eventually offered him police protection.

Manasseh holds a bachelor of arts degree from the Ghana Institute of Journalism and a master of arts degree from the University of Ghana’s School of Communications Studies. Apart from his investigative work, Manasseh is also a prolific writing whose piercing pieces seek to prick the conscience of duty bearers and fearlessly speak truth power. He is the author of two books, “Voice of Conscience” and “Letters to My Future Wife.” His third book is almost ready for launching.