Meet Her Excellency, "Oheneba" Dr. Lesley Akyaa Opoku-Ware, An Appointee of Nana Addo and A Royal.

It takes sheer favour, to receive a presidential appointment, especially when there are many Ghanaians, who may be potentially qualified to be appointed. It was therefore, moments of pure joy, when Oheneba Dr. Opoku-Ware who is blessed with 5 adult children, was duly appointed.

Clearly from the official prefix to her name as "Oheneba," translated as "Daughter of a King" and with her surname as "Opoku-Ware," trust me, we will not need a top notch prophet to tell us that, her loins, were indeed birthed in a royal family and if rightly so, deep in the center of the royal Asante Kingdom family.

I can confidently affirm that, she is the youngest biological daughter of the late Asantehene, whose passing on, saw the current Asantehene, been enthroned as the overload of the Asante Kingdom eventually. 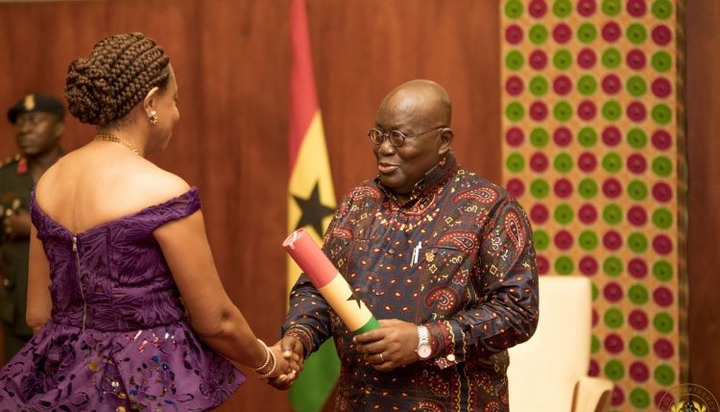 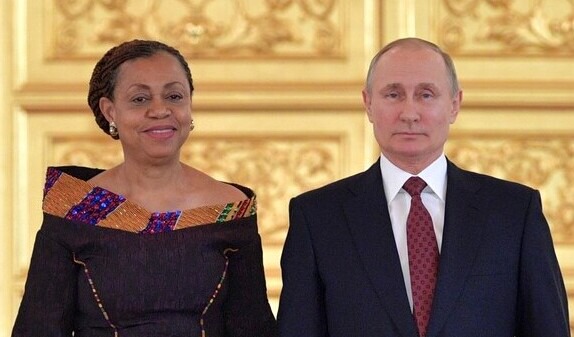 Graduating from the Royal College of Surgeons, Dublin in 1981 most of her working life was spent in the United Kingdom. She obtained her General Practice qualification as a family physician in 2003 from the Royal College of General Practitioners (U.K)In 2013, she received her registration from the Ghana Medical and Dental Practice Board as a Family Physician specialist and had a short stint working for the Ghana Health Service before undertaking. 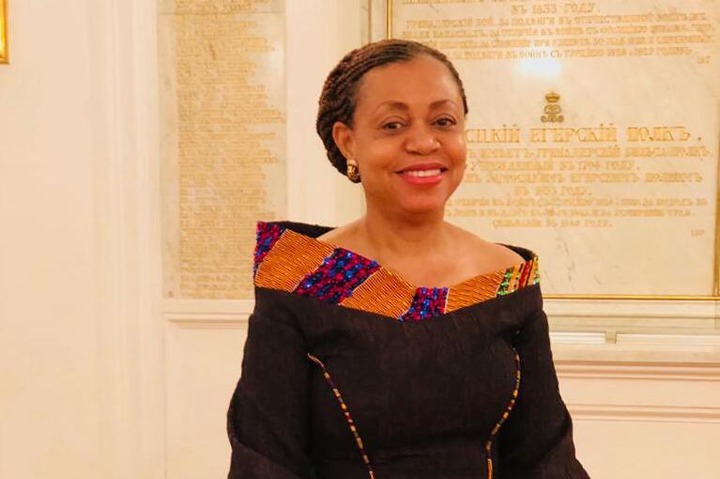 Other positions held in Ghana included the chairmanship of Petronia City Developments (2012-2015) and Deputy Chair Board of Trustees, Head of State Awards (HOSA/Duke of Edinburgh Awards Scheme 2014 to 2018), the building and establishment of Euracare Medical Centre in Labone, Accra. She was Managing Director until her appointment to serve. She left the shores of Ghana to take up post in Moscow as Ghana’s first female Ambassador to the Russian Federation.

H.E. Ambassador Oheneba Dr. Lesley A.A. Opoku-Ware met with H.E. Mikhail Bogdanov, Deputy Minister of Foreign Affairs of Russia on 17th September, 2020. Among the issues discussed was the need to deepen Ghana-Russia relations post Russia-Africa Summit Sochi, with particular focus on investment cooperation in the area of mining and refining of gold, manganese and related minerals and present at the meeting were Messrs. Sergey Baranov and Dmitry Aleynikov, representatives of Gazprom Global Resources and this meeting, received wide media coverage in the Russian press. 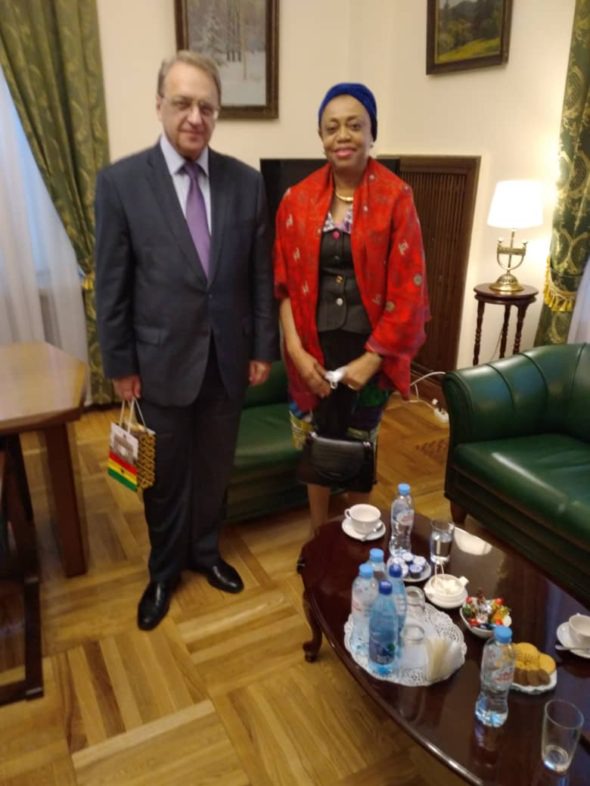 Her father, Otumfuo Opoku Ware II (born Jacob Matthew Poku, 30 November 1919 – 26 February 1999) was the 15th Asantehene. He succeeded his uncle Osei Tutu Agyeman Prempeh II in 1970 and ruled for 29 years before passing away in February 1999. He was succeeded by Otumfuo Nana Osei Tutu II.

The future monarch was born under the name Jacob Matthew Poku in Kumasi the capital of Ashanti, then the Ashanti Protectorate, in 1919 into the Ashanti royal family. At the time, Prempeh I was Asantehene, as the Ashanti Emperor-King is called, before being succeeded by his nephew Prempeh II in 1931.

Prempeh II in turn was Opoku Ware II's uncle, making the boy one of several candidates to succeed him, as to be decided by the Queen-mother, or Nana Asantehemaa. After attending Anglican school, Poku went to Adisadel College in Cape Coast. After working in the public sector for a while, in the 1950s, he moved to the United Kingdom to study law at the Middle Temple and was admitted to the bar in 1962.

Then, he worked as a building inspector and later for the Public Works department from 1937 to 1943. After that, he was trained as a surveyor and worked on the Kumasi Traditional Council Hall and Kwame Nkrumah University of Science and Technology. Returning to the Gold Coast now Ghana after being called to the bar in 1962, he worked in the capital Accra first and then set up a firm in Kumasi.

Through his success as a lawyer, Poku was able attain a great respect in Ashanti politics. Following the coup that overthrew Ghana's first president, Kwame Nkrumah in 1966, the National Liberation Council military government appointed Poku to their executive board as Commissioner for Communications (equivalent to Minister for Communications) in 1968.

In 1970, he was named ambassador to Italy, but shortly thereafter his uncle, the King of the Ashanti, Prempeh II, died. Due to his legal and political successes, he was chosen to succeed his uncle and enthroned as the Asantehene. As King, Opoku Ware II maintained a good relationship with Ghana's President Ignatius Acheampong, and later Jerry Rawlings.

He focused on trying to implement the traditional justice of the Ashanti ethnic group, rather than becoming involved in national politics. Much like his predecessors, he rarely appeared in public and usually had a spokesman represent him. When he did appear, he was as tradition demands covered in gold and wore an intricately woven kente cloth.

In 1985 the stool Nkosuostool (Development stool) was created by Asantehene, Otumfuo Opoku Ware II, as a catalyst for development in Kumasi and beyond. Since then the trend of bestowing the title of Nkosuohene or Hemaa on notable people in Ghana has gained prominence.

In August 1995 he marked his silver jubilee celebration representing 25 years of his reign as Otumfuo Asantehene. In 1945, he married another member of the royal family, Victoria. In 1996, Opoku Ware II's wife Victoria passed away. On February 26, 1999, the King himself died. He was given a state and Ashanti cultural funeral spanning four days of ceremonies blending both African and Christian traditions and buried on 25 March 1999 after a month of mourning at the Royal Mausoleum. He was succeeded on April 26 by Otumfuo Nana Osei Tutu II after a period of mourning. He was survived by his three children Nana Osei, Gifty (1950-2018) and Leslie Poku. 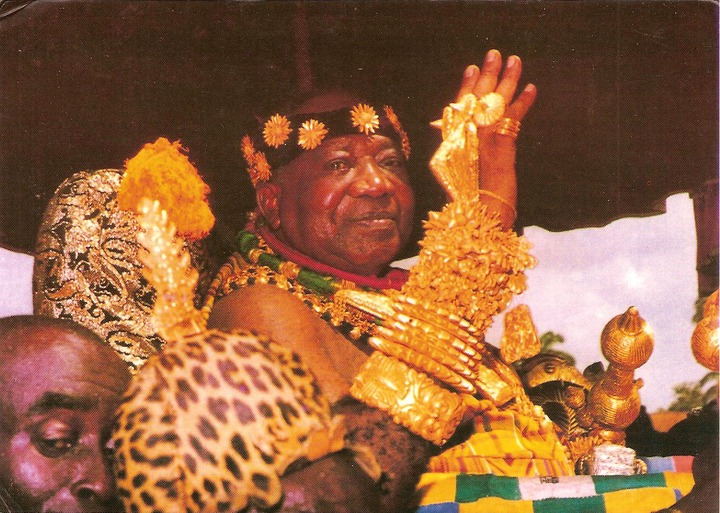