A Policeman is reported to have stabbed to death two residents at Kwame Danso in the the Bono East.

According to Adom TV News, the personnel who is known for his strange behaviour had been the cause of some unacceptable behaviours in his neighbourhood, ranging from threats and noise making. He was believed to be suffering from mental disorders. 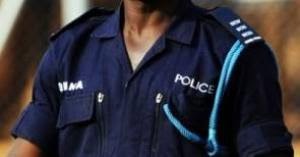 The Gyaasehene of one of the suburbs in the community has been reported as a victim of this crime. The chief who was indoors tried to come out to find out what was going on after he heard shouts for help, but unfortunately the insane policeman was running away after stabbing two persons in the house and came face-to-face with the chief. He stabbed him as well, but Nana Oteng could not survive it and gave up the ghost later on at the hospital.

Sensing danger, the fugitive ran to the Police Station for protection, but the massive provoked youth of the town stormed the station, drew him out and subjected him to merciless beatings until he fell dead.

The bodies of the three including the chief has been been deposited at the Kwame Danso Government Hospital, while the youth have fled the area.

The Police have remained tight lipped on the matter.