"I'm getting married, don't chat me again" 30-year old man cries after reading a text from his girl 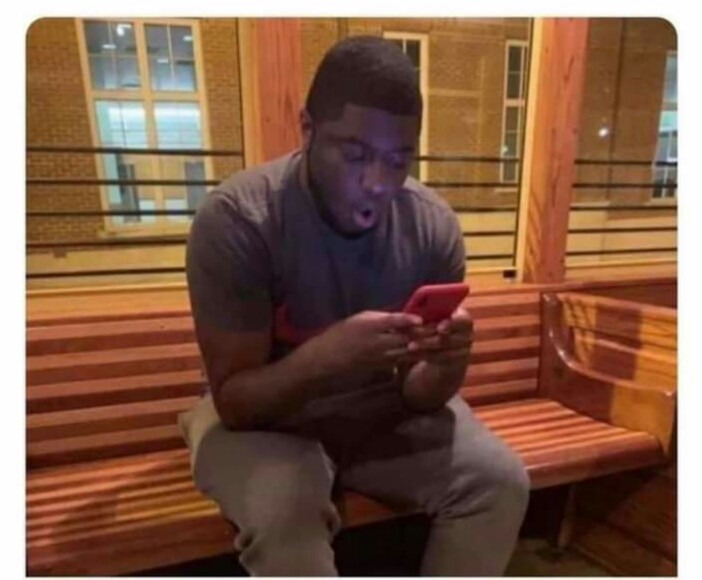 We live in a lonely world as men and boys because if you don't have money to make a girl or woman happy, she will leave you jeopardized without a second thought. Fiifi has been given the shock of his life after his woman of several years left him last night for a man ready for her. Fiifi met Susan at High School, Kumasi Academy Secondary School (KUMACA), now Kumasi Academy High School in 2005 and both have been in relationships ever since.

After graduation from Kumaca, Fiifi who lives in Efutu made way to his city whiles Susan also departed for his town Obuasi in the Asante Kingdom. Obuasi is widely known for its magnificent gold bars and small scale and large scale mining. Fiifi kept into constant contact with his woman whiles they enjoyed conversations of all kinds. Fiifi gained admission to Cape Coast University (UCC) in 2008 right after graduation from school. He went to offer English Language and Literature as he was great in poem writing.

Susan couldn't get admission to any school because of three failures. Fiifi managed to use part of his second semester fees to register Susan for November December private exams registration from WAEC (NOVDEC). Fiifi again paid for classes for Susan with his pocket money knowing perfectly well that he was helping his future wife. Susan was able to pass the exams and bought nursing forms. According to Fiifi it was him who convinced her to chose nursing because he was likely to become a teacher so encouraging Susan to buy nursing forms will balance their marriage in future.

Susan initially wanted to be a teacher but Fiifi managed to put the words of nursing into her. Fiifi who was at his third year at UCC managed to struggle his stomach for food to save nursing fees and admission fees for Susan. Susan got into Dunkwa-on-Offin Nursing and Midwifery Training College to study General Nursing. Fiifi paid for the admission and also paid for everything whiles he struggled at UCC. He went days without food just so he can save the money his parents offer him for his woman.

Fiifi had good intentions but only a woman ready for her life can tell who she wants. Fiifi was denied graduation from UCC because he was owning fees. He used most of his school fees to make sure Susan had a fruitful stay at nursing school. Fiifi spent another year at home before he was given the go ahead to graduate, that was after he settled his unpaid bills with the University.

Instead of spending four years in school, Fiifi spent five years because of the unpaid bills and graduated in 2013 instead of 2012. He did his mandatory National Service in 2013 and completed in 2014. During his National Service, he made sure to give half of his salary to Susan every month so she can take care of herself monthly. Not knowing Susan will come back in 2020 and tell the man who paid for virtually everything from her exams registration to her nursing admission fees, to three years of nursing training cost to move on.

Susan after completing of her rotational nursing duties to the state forced Fiifi to either get a job or do something because according to her, she was growing. Susan who is almost 28-years (2 January 2021) thinks been marriage is waiting so long so she gave an accountant and a banker who works with UBA Bank a chance after the lad proposed marriage to her. Susan is scheduled to marry the man on next week, Friday for traditional (December 11) wedding and Saturday (December 12) for white wedding at somewhere in Kumasi but Fiifi doesn't even know the exact place.

Fiifi heard of rumors going around that Susan was getting married, he confronted her on the phone and Susan hang the phone and switched off her number last week Monday. Susan last night sent Fiifi a message of she getting married so Fiifi should move on and switched her number off again. No attempt from Fiifi has been successful to trace the location or the exact place the wedding is taking place in Kumasi next week Friday and Saturday. Fiifi has been crying all day after reading the messages according to his sister Emefa. 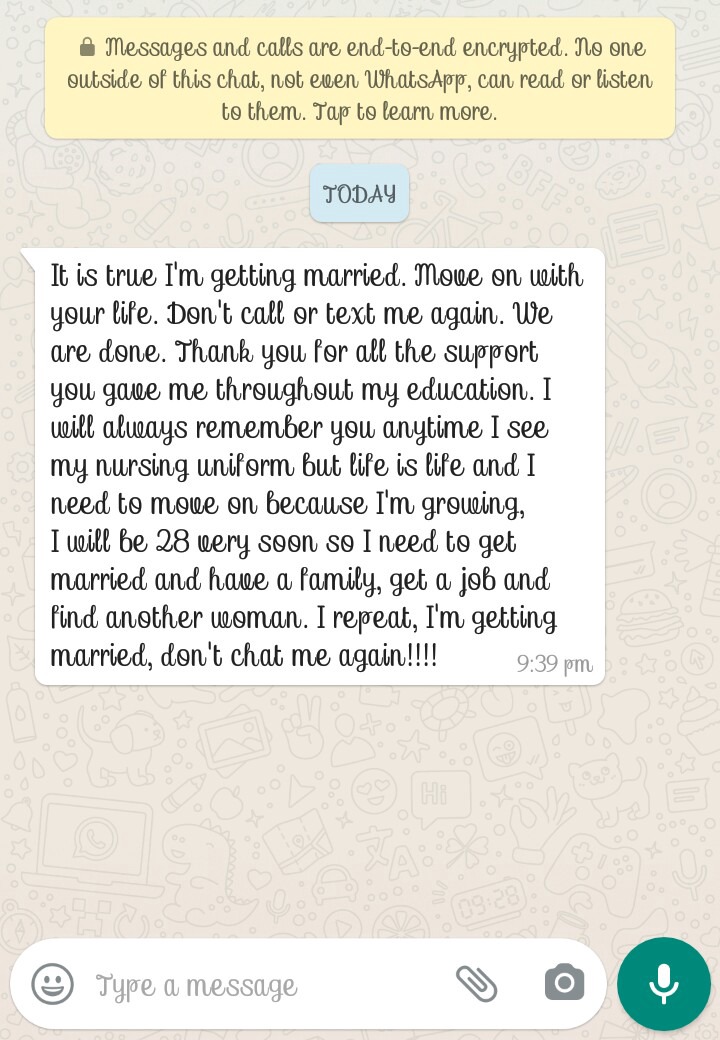