Wicked Couples Cut off a small boy fingers and have been Jailed.

By GhanaNews1 (self media writer) | 1 year ago

A small boy who lost all left fingers to physical abuse by a couple at South Suntreso, in Kumasi now has justice, with an eight-year jail in prison for each for the culprits.

A bench warrant has been issued for the arrest of Nana Oti Oduro, one of the convicts who failed to go to the court on judgment day.

Over four years since the incident occurred, trial of the case passed through the hands of two Circuit Court judges.

That was about five years ago when then one-year-old Junior’s sored fingers were amputated. They were found to be almost dropping due to pain inflicted on him by adults, including his biological or Real father, who were supposed to provide him love and much care.

Continuously, he is now six years and he doesn't even know why he has no fingers on his left hand.

Junior, who featured prominently in Erastus Donkor’s child abuse documentary, Tortured Innocence, tells him of his fear of facing his peers with his fingers cut. 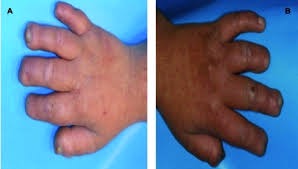 “I don’t want to make everyone see that I have no fingers on my left hand Because in my school, they laugh at it,” Junior said.

Junior was physically abused for nine months. He was rescued and later adopted by the Ashanti Female Lawyers Association. He has since been in the care of this lawyer, with financial support from some anonymous members of the group.

“I am sad and still happy because 8 years is good…If it wasn’t for God, what would this boy become,” his foster mother said.

The road to justice for junior started in 2016, the process going through two different judges until judgment on Thursday, June 26, 2020.

A bench warrant has been issued for the immediate arrest of Nana Oti Oduro who failed to show up in court to serve his sentence.

Content created and supplied by: GhanaNews1 (via Opera News )

WASSCE Wahala: Citizen Mock Popular SHS After One Of Their Graduate Checking All F9 Result