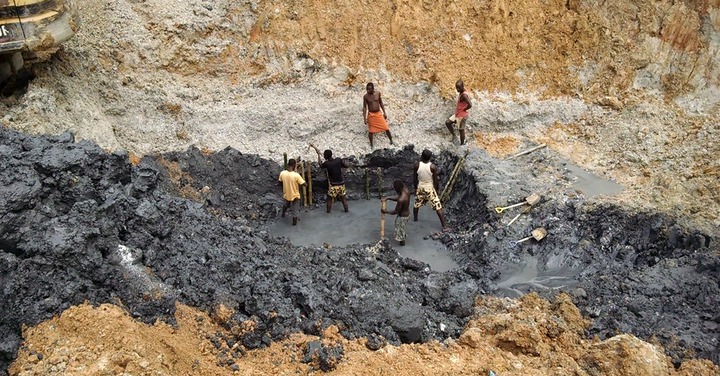 Six illegal miners are confirmed dead at Mpohor Banso in the Western Region of Ghana, after a Galamsey pit where they were mining from caved in.

District Chief Executive for Mpohor, Mr. Ignatius Asaah Mensah who confirmed the unfortunate incident to Skyy Power FM in Takoradi indicated that the six young men are not indigens of the community.

He narrates that they were trapped in a galamsey pit which has been abandoned for many years, after they smuggled themselves to search for Gold. The sad incident happened on Wednesday October 14 2020.

The lifeless bodies of two of the illegal miners were retrieved from the pit immediately, whilst the remaining four were removed in the later hours of Thursday 15th October 2020.

Mr. Ignatius Asaah Mensah indicates, the families and the identities of the six young men are still being investigated since they are new in the community. He added that a team from the district Police command were dispatched immediately to the location.

“Yes, I can confirm that six young men have been killed after the illegal mining pit collapsed at Benso. It is a pit which has been abandoned for a long time and they secretly found their way there. It is actually someone’s land and the owner hardly visit it. The pit itself has been hanging because they have already dug the down so after the rain, the top became lose and it collapsed whilst they were inside mining. The police quickly got there and two were retrieved. The remaining four, were taken out the following day”. Mr. Ignatius Asaah Mensah told Mpimpimhene Nana Gyetuah of Skyy Power FM.

He added that the eldest among the six is about 30 years. According to him one of them has been identified as an indigene of the Ahanta West constituency of the Western Region.

Mother Kills Her Own Twin Babies