By fredwens (self media writer) | 1 year ago

The police arrested five other people who are said to have attacked two police stations in the Volta region.

Confirmed names Are as followed:

The defendant, who had no legal representation, was charged with three counts of conspiracy; thus stealing,participating in the campaign of a banned organization (Western Togoland) and causing unlawful damages.

Their charges were read and explained to them. However, the court, chaired by Mrs Rosemary Baah Torsu, conserved their pleas and remanded into police custody to reappear on October 13.

According to the Public Prosecutor's Office headed by Assistant Police Inspector Sylvester Asare (ASP), the defendants were residents and natives of Apepe, Battor and Volo in the Volta region and were also members of a prohibited organization, namely West Togoland.

ASP Asare said on September 25, 2020, that along with 20 other people, they armed themselves with offensive weapons like cutters and revolvers(guns)y and the besieged police stations at Aveyime and Mepe, respectively.

According to the prosecutor, the defenders raided the assembly offices of these stations, attacked several personal service agents and destroyed premises along with 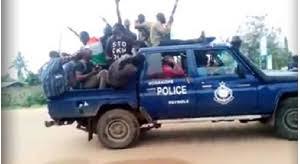 Content created and supplied by: fredwens (via Opera News )