By whois.ab (self media writer) | 2 years ago

A 34 year old man master,shaibu of kuntunse has been shot dead at the kuntunse satellite in Eastern Region. 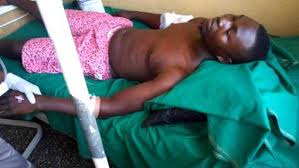 Shaibu is said to be part of a car and car parts battery stealing which invaded Ali Musah Mahamma at about 2:00pm last Saturday and were chased by the residents.

Shauna was shot dead while an accomplice,Erick Boadi,a taxi driver,was seriously injured and is on admissions at the police Hospital Accra.

Confirming the incident kankam Boadu,commander of the Nsawam District police,said Shaibu and his group raided the kuntunse township in a taxi stealing car body parts,car batteries,metals,plastics and some times people's private cars which has been park outside.

The police commander said during the gang's operation,an alarm was raised and the residents chased them,leading to the shooting and death of Shaibu.

He said the body has been deposited at the police Hospital mortuary for autopsy.

Supt.kankam Boadu said the members of the group are being sought by the police.

Content created and supplied by: whois.ab (via Opera News )