By LizzyMedia (self media writer) | 1 month ago 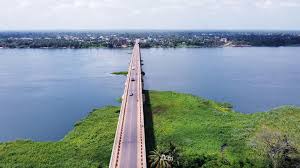 Tongu is an Ewe speaking community in southern Volta of Ghana. The word is two jointed Ewe word: 'tor' and 'ngu'. Tor means river and ngu means Near , hence Tongu meaning Near River. The name Tongu refers to the Ewes who live along the River Volta, and whose main occupation is fishing and farming. Before the construction of the Akosombo Dam, the main main occupation of the people of Tongu was fishing. Tongu is made up of thirteen ( 13 ) traditional areas. The include Mafi, Agave, Fievie, Bakpa, Sokpoe, Tefle, Mepe, Battor, Volo, Doffor, Vume, Fodzoku and Torgorme. The largest of these traditional areas is Mafi, followed by Agave then Fievie. The Tongus also have clans and gates which occuoy chieftaincy stools. Its land, geographically, covers an area of roughly 1950/2, and shares boundaries with Adaklu to the north

Until in 1989 when Tongu was divided into North and South Districts by Legislative Instrument 1467 and headed by Adidime and Sogakope respectively, Tongu was one District with Sogakope as its capital. Major towns in Tongu include Adidome, Sogakope, Mafi Kumase, Juapong,

Content created and supplied by: LizzyMedia (via Opera News )

Criticism must be free of insults - Rev. Prof. Frimpong-Manso