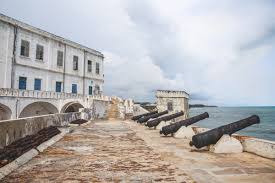 The history of the trans-Atlantic slave trade is undoubtedly the most familiar narrative Americans have of Africa. Upwards of 12 million slaves were shipped out of Africa to supply labor to the New World, and several million died along the way. It stands as one of the greatest migrations---although a forced migration---of humans ever in history.

The remnants of this narrative can be found across the American South, in the islands of Caribbean, and in the nations of South America. Generations after the slave trade was outlawed, African cultural traditions remain an important aspect of New World cultures, evolving over time to become distinct traditions themselves. Yet, to understand the beginnings of this story, one must travel to the Cape Coast of Ghana to visit the slave castles.

One of the most famous slave "castles," the Cape Coast Castle, was built in 1653. Initially a wooden building, the Castle was constructed for trade in timber and gold by the Swedish Africa Company, under the direction of Hendrik Carloff, for the King of Sweden. Later rebuilt in stone, the Castle, along with its surrounding area, was the site of the European struggle for domination of the major sea ports along the Atlantic coast of Africa. Seized by the Danish in 1663, the Cape Coast Castle was quickly transferred to English control one year later.

Similar to the Cape Coast Castle, Elmina Castle was also transferred between the European powers. Portuguese construction of Elmina Castle began in 1482, making it the oldest European structures south of the Sahara. A vivid representation of the solidification of European presence and control in the West African region, this Castle was captured by the Dutch in 1637 and later came under British control in the 1800s. Yet, no matter which nation held the Castle, control over trade was the primary mission of this outpost. By the seventeenth century, most of this trade was in people.

Slavery was not new to Africa, nor anywhere in the world for that matter. However, the sheer number of people taken out of central and western Africa had a profound impact on the history of that continent as well as the continents to which the slaves were taken.﻿

Before traveling through the infamous Middle Passage, slaves were brought to the coast, and held in fortifications such as Cape Coast Castle and Elmina Castle. Up to a thousand slaves could be kept in the dungeons. Conditions were appalling, with 200 slaves in one room, and no space to lie down. The floor was littered with human waste, making it now several inches higher than it was when originally built. Many became ill with malaria and yellow fever.﻿Conditions did not improve for the slaves that survived to pass through the "Door of No Return," which led the slaves to the ships that would transport them to the Americas. The Middle Passage, which could last upwards of several months or as little as one month by the eighteenth century, had conditions even worse than the dungeons. An estimated fifteen percent of slaves died on the journey of malnutrition and disease.

Those that reached the Americas faced a life of slavery, most often on plantations. While many came to the United States, many more were shipped to the Caribbean and South America. Yet almost all began their journeys in the slaves castles on the Ghanaian coast.

Both Cape Coast Castle and Elmina Castle can be reached by car or bus from Accra, the capital city of Ghana. Both Castles have been preserved as historical sites, having been named a UNESCO World Heritage Site. Visitors now come from all over the world to visit these historic sites, and to pay their respects to the many people who were taken from their homelands and forced to serve as slaves throughout the New World.﻿