For her beauty, Anastacia Escrava was forced to wear an iron muzzle all her life in Brazil.

By PhozNews (self meida writer) | 13 days 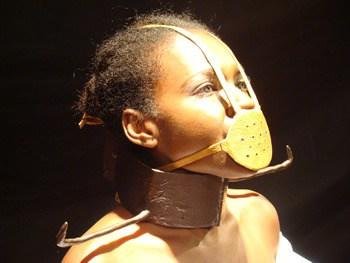 You've definitely seen the iconic image of this masked woman but haven't been able to find out what happened to her.

Escrava Anastacia was an enslaved African woman who lived in Brazil during the nineteenth century.

Anastasia was worshipped in Brazil as a saint and heroine, according to Rio de Janeiro folklore and culture. She was known for her great beauty and piercing blue eyes.

In Brazil, she has developed a cult following, particularly among slave descendants and the poor.

But how did this masked woman become such a significant figure in Rio de Janeiro's black history and culture?

Delminda was sold to Joaquina Pompeu while pregnant with Anastacia after being raped by her white owner.

On March 5, in the first half of the nineteenth century, Delminda gave birth to Anastasia. She was one of the first African-American female slaves to have blue eyes.

Anastacia grew up to be extraordinarily attractive, and many people on the plantation admired her. Joaquin Antonio, the owner's son, became obsessed with her.

The white women grew envious of her and persuaded Joaquin to force her to wear the slave mask.

Because Anastasia refused Joaquin's advances, he raped her and forced her to wear the iron mask for the rest of her life as a punishment.

She was compelled to wear the mask 24 hours a day, removing it just to eat.

She survived for a few years and was subjected to a number of other harsh procedures before succumbing to tetanus once the metal from the mask became deadly.

According to legend, before she died, she forgave her owners for the suffering she had endured. She was reported to possess miraculous healing abilities and to have cured her owner's son of a terrible illness.

After she died, her owner surrendered her slave status. Her remains were maintained in the Church of Rosario after she was buried at a slave cemetery in Rio. Her remains, on the other hand, were destroyed in a fire.

Many people consider her a saint because she is a symbol of love and forgiving. People travel to Vas Lobo, Rio, to worship her, and there is a statue and a place of worship dedicated to her.

Since then, others have petitioned Rome to canonize her as St. Anastacia of Rome.