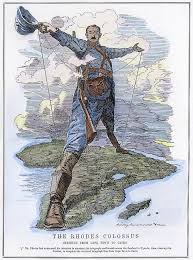 The history of the European seaborne slave trade with Africa goes back 50 years prior to Columbus' initial voyage to the Americas. It began with the Portuguese, who went to West Africa in search of gold. The first Europeans to come to Africa's West Coast to trade were funded by Prince Henry, the famous Portuguese patron, who hoped to bring riches to Portugal. The purpose of the exploration: to expand European geographic knowledge, to find the source of prized African gold, and to locate a possible sea route to valuable Asian spices.

In 1441, for the first time, Portuguese sailors obtained gold dust from traders on the western coast of Africa. The following year, Portuguese explorers returned from Africa with more gold dust and another cargo: ten Africans.

Forty years after that first human cargo traveled to Portugal, Portuguese sailors gained permission from a local African leader to build a trading outpost and storehouse on Africa's Guinea coast. It was near a region that had been mined for gold for many years and was called Elmina, which means "the mine" in Portuguese. Although originally built for trade in gold and ivory and other resources, Elmina was the first of many trading posts built by Europeans along Africa's western coast that would also come to export slaves.

The well-armed fort provided a secure harbor for Portuguese (and later Dutch and English) ships. Africans were either captured in warring raids or kidnapped and taken to the port by African slave traders. There they were exchanged for iron, guns, gunpowder, mirrors, knives, cloth, and beads brought by boat from Europe.

When Europeans arrived along the West African coast, slavery already existed on the continent. However, in his book The African Slave Trade, Basil Davidson points out that slavery in Africa and the brutal form of slavery that would develop in the Americas were vastly different. African slavery was more akin to European serfdom --the condition of most Europeans in the 15th century. In the Ashanti Kingdom of West Africa, for example, slaves could marry, own property and even own slaves. And slavery ended after a certain number of years of servitude. Most importantly, African slavery was never passed from one generation to another, and it lacked the racist notion that whites were masters and blacks were slaves.

By the start of the 16th century, almost 200,000 Africans had been transported to Europe and islands in the Atlantic. But after the voyages of Columbus, slave traders found another market for slaves: New World plantations. In Spanish Caribbean islands and Portuguese Brazil by the mid 1500s, colonists had turned to the quick and highly profitable cultivation of sugar, a crop that required constant attention and exhausting labor. They tried to recruit native Americans, but many died from diseases brought by Europeans, such as smallpox, diphtheria, and tuberculosis. And the Indians who survived wanted no part of the work, often fleeing to the countryside they knew so well. European colonists found an answer to their pressing labor shortage by importing enslaved workers from Africa.

By 1619, more than a century and a half after the Portuguese first traded slaves on the African coast, European ships had brought a million Africans to colonies and plantations in the Americas and force them to labor as slaves. Trade through the West African forts continued for nearly three hundred years. The Europeans made more than 54,000 voyages to trade in human beings and sent at least ten to twelve million Africans to the Americas.