By LizzyMedia (self media writer) | 2 months ago 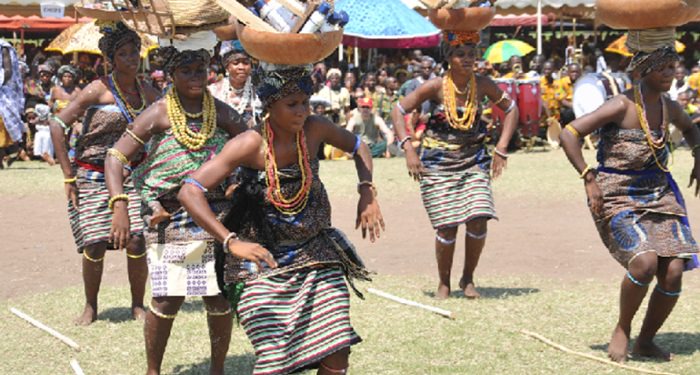 Klikor is a town in the Volta Region of Ghana, which is in the southwest portion of the country.

It is situated very close to the Togo border. The Ewe people migrated to Ghana and our originally all the way from Nigeria or what is today called Benin. "Like most people of present-day Ghana were immigrants who came to their new home only a few centuries ago.

Ewe traditions tell a movement from Ketu what is now the Peoples' Republic of Benin, making a number of stops of varying duration on the way".

The Notsi kingdom was established and a tyrannical king ruled over the people. The Ewe people dispersed to Togo and the eastern region of Ghana, today's Volta region in order to get away from the horrible rule. This all happened around 15'h and 16'h centuries. The cultures of Togo, Benin and even Nigeria (specifically Yoruba peoples) strongly influenced the culture of the Ewe because of their migration.

Many similarities can be found between all of these cultures and Eweland.

Klikor is home to peoples who still hold on to and practice traditional African religion.

Much of Ghana has become Christian and Muslim and Klikor is one of the few places where traditional practices are dominant.

The Ewes of Klikor are a people who value their traditions and will continue to preserve them.

The Concept of God

There is the belief in an almighty God all over West Africa. In Eweland it is referred to by the name "Mawu" and the spiritual or sacred name "Sogbo Lisa". "The origin and meaning of the word is obscure; 'none greater' or 'overstretching' have been

The general belief is that Mawu can never be seen but is only revealed through Mawu's creations. "To West Africans, God is essentially a spirit, a being without concrete form or body. He is therefore never represented in the form of images or worshiped through them. God is also thought of as different from all the other spirits and divinities. His powers transcend theirs and he has the unique attribute of immanence."

God cannot be objectified so it has the help of divinities and spirits to work in the matters of man. Humans are believed to be apart of God and each person has part of Mawu's creative spirit in them. "Mawu created all souls.

The soul is Se or Mawase, the Mawu who lives in everyone's body, like a guardian spirit of genius."

Through this idea we can see that God is working within humans and is a large part of peoples purpose.

The Concept of Deities

Spirits or deities are called Trɔ (sing.), Trɔwo (pl.) in Ewe. The belief in deities can be found throughout West Africa.

The Orate of the Yoruba, the Vodu of the Fon,

Abosom of the Akans or Alusi ndimmuo of the Ibo, is just to mention a few. "

"Trɔ" act as children and agents of God and work to do Mawu's will. They may be good or act evil, male or female (even both in one), and they are given places to act as their abode.

They are often revealed to man through nature and personified. This is stated by Parrinder, "Many of the divinities worshiped in West Africa seem to have come from the personification of natural forces, since all the universe is thought to be people with spirits"

The most popular deities of West Africa are those of the Sky- (Thunder, Lightening, Storm); Those of Water (River or Sea); Those of reptiles (snake, alligator, chameleon);

Those of Mechanics and Metals; Protective guardians or tricksters (for example: Alegba in Ewe-Fon, Eshu in Yoruba); the gods of divination (for example: Afa- Ewe-Fon and Ija-Yoruba); and most often the “mother earth" is expressed as a spirit to be worshiped.

The Concept of Ancestors

West Africans often believe that after death the dead enter into a spiritual state of being and become Ancestors. Ancestors are still working within the family community after their death but just through the spiritual plane.

One must make offerings to them usually through the pouring of libation (an offering of hard alcohol-usually gin or shnapps). The prayers and offerings to them ensure that they will help you in what ever you request.

This involvement with the ancestors is an integral part of the spiritual ideologies of West African Religion, including the Ewe belief system. They are called open just as often as the divinities are to help or hurt in the matters of man. In order to understand the traditional religious belief system of the Ewes the ancestors must be included.

Content created and supplied by: LizzyMedia (via Opera News )