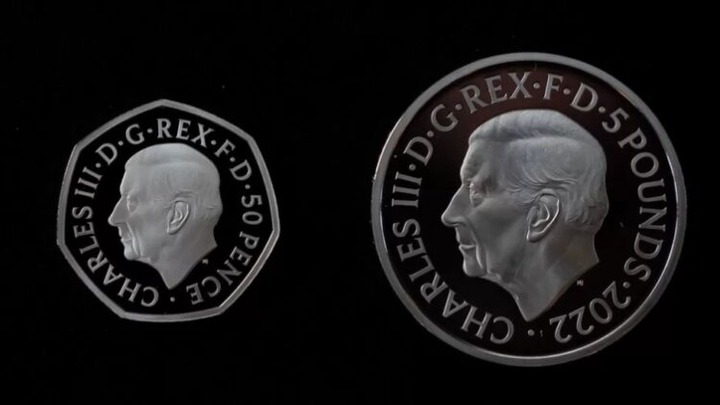 A 50p coin with King Charles III's portrait will go into widespread circulation in the coming weeks, as per newly unveiled coins bearing his image.

The commemorative £5 Crown and 50p, both of which include a carving of the King by British sculptor Martin Jennings, were initially shown to BBC News.

The monarch is now facing left, the opposite direction from his predecessor, on the coins, keeping with centuries of tradition.

He doesn't wear a crown, unlike the Queen and earlier British kings.

The effigy was given King Charles' personal approval, and it is believed that he was satisfied with the likeness.

The Royal Mint will start selling the coins to collectors early next week.

Banks, building societies, and post offices will distribute the 50p coin in accordance with demand well before the year is over.

They will circulate concurrently with coins honoring the late Queen, so businesses will continue to accept those 27 billion coins.

King Charles and Queen Elizabeth coins will continue to be in circulation side by side for a very long time, according to Anne Jessopp, chief executive of The Royal Mint, who stated that coins typically last for 20 years.

The common 1p to £2 coins that we use every day will begin to be produced with the same image of King Charles at the beginning of the following year.

They will be distributed when necessary to replace older, worn-out coins that have been damaged or to meet any sudden demand.

The official image and inscription were both designed to give the King a more approachable appearance.

On the inscription, the Latinized form of each former British monarch's name is used to identify them. The new coins, however, read Charles III rather than Carolus.

The new £5 coin's reverse features two fresh images of the Queen, tracing her development from a child monarch to a seasoned head of state.

The reverse of the 50p coin is an exact replica of the 1953 Crown coin produced to mark the coronation of the Queen.

Martin Jennings' first coin design features the likeness of King Charles, but he has also created public sculptures of poets including John Betjeman in London's St. Pancras Station and Philip Larkin in Hull.

He created the design using images rather than the King sitting for a specific portrait.