The History of bees for protection

By kaycidiGh (self meida writer) | 19 days

Once upon a time, my mother told me a story about the Guans in Sene West where I come from. Sene West is in Bono East Region, it shares boundary between Atebubu District in the West, Pro District in the North, Sene West in the West and parts of Ashanti Region and Eastern Region in the South where Dugya National park is located you can go there for excursions, you will see different kinds of Animals. The District was named after the Sene river it is part of the V 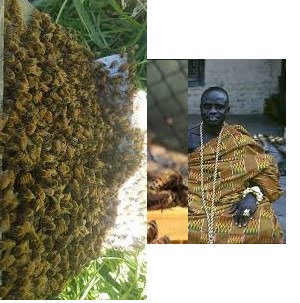 oltal river. The people of Sene West speak Guan(kenyene), Sene is a mixture of many tribes like Konkombas, Dagombas, Mosi, Ewes and so on. The main occupation in Sene District is farming and trading, they cultivate difference kinds of crops especially Yams, Groundnuts, Beans, maize and cashew as their cash crop. People from all over the country go there to buy things especially food items and fish. Wednesday is the market day of Kwame Danso the capital of Sene West, people of Sene West are one of the indigenous people in Ghana according to history. There are three may religions being Christianity, Muslims and Traditionalist, the Guans in Sene District eat Yam fufu and light soup as their favorite food. They have festival call penkyere, it is cerebrated between December and January, in the traditional town called DwanKrom where the Chief of the people live, that is where their gods are according to history the festival is cerebrated, starting from Friday to Monday. Saturday is the day the Chief is carried in a Palenque. There is a big tree in the forest where every body apart from other tribes go there for blessings from the gods, if you are not . The history about the Guan in Sene West is that, when different tribes are trying to fight them they do not confront them physically but they send swap of Bees to attack them. One strange thing is that the Bees do not attack the natives thus the Guans but they attack their opponents. because of that, the other tribe are scared to attack the Guan. Thank you for your time please share and comment. .

How to use lemon and salt to tighten and cure infections.