By AccraBlogger (self meida writer) | 18 days

In his paintings, Tilapia the Cartoonist has always lent his voice to national issues. He has yearned for a positive image as a gifted artist. In terms of current events, Tilapia chose to discuss what happened in Makola on Monday morning, which stunned the entire country due to the fire department's response. According to sources, a neighboring fire station is only a few yards away from the location, but they would never be able to put out the fire in its early stages.

They allegedly came to look at the flaming flames and then returned to fetch their fire tender engines, according to sources. When the business owners spotted their vans speeding towards the site, their expectations skyrocketed. They started their engine after landing and preparing to put out the fire, but there was no water. The little water in the vehicle at the moment had insufficient pressure to reach the top, where the fire was burning fiercely. They unlocked a nearby fire hydrant that had been blocked by market women in search of a backup, only to find it dry of water as well.

Tilapia the Cartoonist focuses his attention in his current artwork on the emptiness of the outflow hydrants. The connection between the two photos in his piece is "no water in the fire hydrants in and surrounding Makola," according to one cop, and "move to nearby," according to the other.

If there are continually vacant fire tender engines and hydrants, there is little hope that our fire service will be able to put out future such fire outbreaks elsewhere in the country. Most of the time, buildings and properties are fully destroyed before they can arrive on the scene to put it out. How much longer can we as a country go on like this?

To make it easier for firefighters, mayors in big cities must destroy all structures placed near fire hydrants. 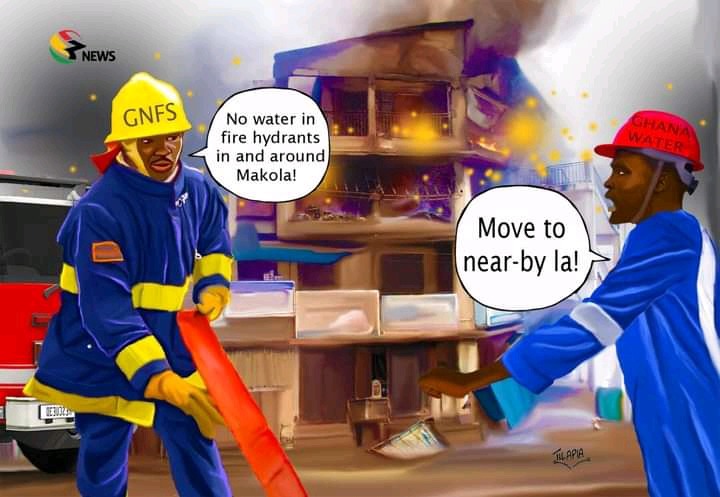 Young nurse was shot to death by armed robbers at Tilli in Upper East region.

Look Cheerful, Elegant And Spectacular In These Styles That Are Specially Designed For Fashionistas

Laugh through the holiday with these funny WhatsApp statuses

“If Your Husband Cheats But Doesn't Bring Her To Your Room, Don’t Leave him" – Woman Share Sad Story