By Wysopera (self meida writer) | 26 days Corruption is a cankerworm that destroys nations. When a nation is deeply engulfed by corruption, many believe that the fight against it must begin from scratch. Most a times, people try to fight corruption from top officials, forgetting that its root could just spring up from unexpected sources.

The more people try to fight corruption from the top, the more it breeds from the bottom, unnoticed. A Facebook post has revealed an alleged inflation of price on a structure believed to be constructed by the Students Representative Council of the University of Development Studies (UDS). The post has generated a lot of views and comments on what Facebook users think was going on behind the scenes.

Most leaders have at a point in time been criticized for inflating the prices of structures that they have constructed. Bawumia, the vice president has recently made a statement that he had laughed when he realised that the New Democratic Congress constructed a particular hospital at a cost of twenty five million dollars. In a statement captured by Ghanaweb, the vice president alleged that he believed that the price might have been inflated by six hundred percent.

The New Patriotic Party government is not free from such accusations and they have also been criticised on the grounds of corruption on many occasions.

As the structure believed to have been inflated surfaces online, many facebook users claim that the acts of corruption in the country mostly originate from such levels. Take a look at the structure below. 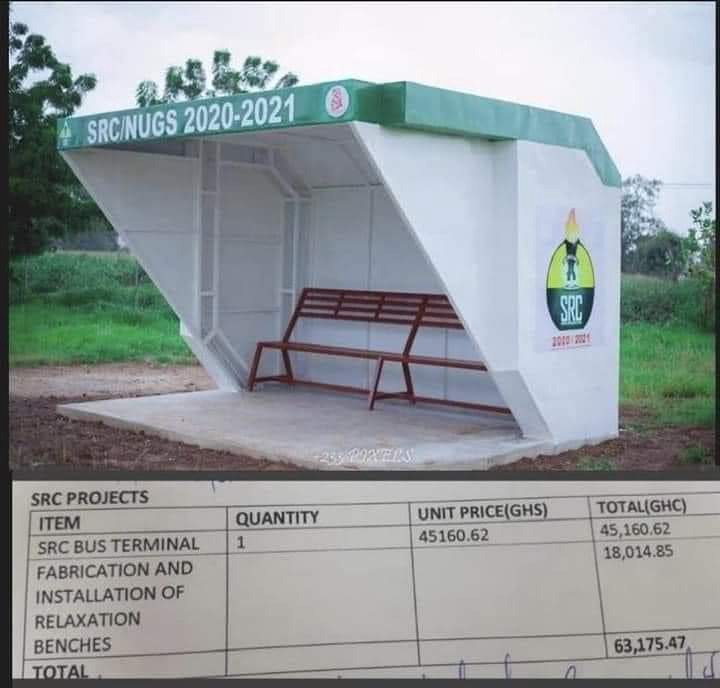 The structure is supposed to serve as a place of relaxation. It is a common structure mostly found at bus terminals along the road, meant to serve as a temporal resting place for people. The structure is believed to have cost GHC 63,000.00. The cost at which the structure was said to be built was alarming to Facebook users and they have this to say.

Majority of the reactions above point to the fact that users believe that activities by leaders in such institutions result in the corruption we are facing as a nation today. Take a look at the cost of the bench that is stipulated at GHC 18,014.85 in the document attached. It has been captured as benches and not a bench, meanwhile the structure was captured as a single structure.

If indeed, corruption begins from here, then stakeholders of education and other bodies involved have a great task ahead of them in the hope to curb such practices.

Do you think that that structure can be built at that cost?