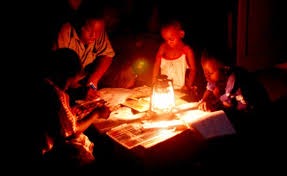 Earlier this month the official for GRIDCO came out with power outage time table because of the maintenance that is going to carry within three month . The maintenance work according GRIDCo it is necessary so that they will solve the congestion challenges on their systems. It said the technical team was still working to restore power supply to all bulk supply points around the country, more than two hours into the outage.

"GRIDCo is also working to ascertain the reasons behind the total system shutdown to update the relevant stakeholders," said the statement.

The Eastern, Ashanti, Western Volta, Northern, and the Bono regions also reported that the power supply was down.

The West African country which celebrated its 64th independence anniversary Saturday, experienced a two-year-long crippling power crisis between 2013 and 2015, leading to lower economic performance over the period

Corporate Communications Manager for GRIDCo, Ebenezer Amankwah explain to Ghanaians that parts of Ghana will experience intermittent power outages so that their engineers go work on substations and plants across the country.

And they know that this power challenges will be solved after the maintenance being carried out.

Impact of dumsor on the Ghana economy

Between 2013 to 2016, Energy analysts reveal that Ghana lose up to USD 3 billion in terms of economic activities and thousands of people their jobs losses during the almost four years power crisis.

Ghanaians term de low power supply and load shedding as "dumsor," the inconvenience cause demonstrations across the major cities of Accra and Kumasi where protestors criticised goverment for poor management of the economy. At the peak electricity users in Ghana experience 16 hours power outage.

How to prevent dumsor in Ghana

It sounds like common sense, but simply accepting load shedding is a regular occurrence and preparing for it will seriously reduce the hassle it causes for you. Keep up to date on the load shedding schedule by following the published timetable closely – do be aware that often the schedule changes at the last minute though and so will need to be checked regularly throughout the day if you don’t want to be caught unawares. Remember to keep an eye on the fuel tank in your car, as during a power cut you won’t be able to fill it up, and make sure you get cash out of the ATM in advance if you might need some. Keep an in-car charger for your phone so you can charge your devices whilst you’re driving around.

Power outages cause more than just mere inconvenience – they could actually be damaging some of your electrical devices. Power outages cause unexpected computer shutdowns, and a sudden loss of electricity interrupts the shutdown sequence of your device and can leave it inoperable. It can also cause file corruption and, over time, these cuts damage the lifespan of your hard drive. Avoid this problem by ensuring all your sensitive electrical equipment is shut down fully and unplugged before the scheduled load shedding is due to begin, and invest in a surge protector for your plug sockets to protect devices when the power comes back on.

Another option is to go for a UPS system (uninterrupted power supply) if you want to further protect your devices – this is a system that kicks in with additional power the moment the mains electricity goes out. It’s not the same as running a generator and the power won’t last as long, but it will buy you some additional time to finish off what you were doing and shut down safely. It isn’t a cheap solution to load shedding, but is becoming more affordable. If you’re not sure if this is the right product for you, get advice from a professional.

During evening load shedding, lights are probably going to be the thing you miss most. Ensure that you have good torches that are fully charged at all times, and a supply of candles and matches in the house so when you need them they are close at hand.

Solar lamps are a great, cost effective way of lighting your home during load shedding – with the added bonus that once you’ve bought them, you won’t be paying for electricity to charge them. From quirky solar jars that look great in your garden as you recharge them, to permanently installing solar outdoor security lights, there are solar lighting load shedding solutions to suit any budget.If you need more light than solar lanterns, candles and torches can provide, then you may want to think bigger. Rechargeable globes are a wonderful innovation – they act just like regular globes when the power is on, but they contain a small battery within them that charges from the mains power. When the power cuts out, the batteries kick in and lights your room as normal.

You could also consider a full conversion to solar – if this idea appeals to you, or you’d like to find out more about your renewable energy options, then speak to an electrician today.

There are some electrical devices that you may feel you simply can’t survive without during load shedding. Perhaps you work from home and need your PC to remain on, or having a constant internet supply is a must. If that’s the case, then a small generator could be the thing you need. A petrol generator is going to be quite noisy and disruptive and is probably not the ideal option if you’re trying to work or have young children around. A great alternative is a solar generator like this from Ecoboxx – they are different options to suit your specific needs, and they can power devices such as lights, fans, televisions, internet routers, laptops and radios. You can also charge the generators from a normal AC/DC wall charger if the sun isn’t shining.

The Causes Of Child Labour.

3 cars involved in an accident at Legon.