By Teckmo (self media writer) | 9 days ago 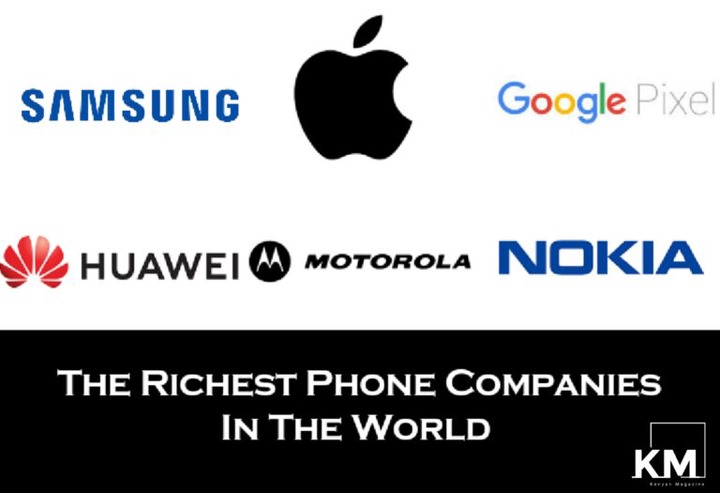 What’s the richest phone company in the world?.

Here is the list of the top 15 mobile phone brands in the world this year with respect to their current Net Worth.

Smartphone companies have dominated the industry and they are among the wealthiest companies in the world.

In today’s world, over 6.5 billion people all over the world use smartphones, which means that smartphones are technically used by around 84% of the world’s population.

Phone brands ranking of the world’s largest mobile phone companies is as follows.

These are the richest phone brands in the world ranked by their respective Net Worth.

Apple is currently the world’s richest phone company and one of the largest company in the world.

The smartphone company was founded in April 1976 by Steve Job, Steve Wozniak and Ronald Wayne in the United States of America.

Apple headquarters are located in 1 Apple Park Way, Cupertino, California, United States and the company has employed over 150,000 people.

The second richest smartphone company in the world is none other than Samsung.

Samsung was founded back in 1969 on the 13th of January in South Korea, by Lee Byung-Chul.

Samsung Net Worth: over $90 Billion

Taking the third place as the wealthiest mobile phone company in the world is Google Pixel.

The company was started back in February 2013 by giant company Google.

Launched in September 1987 and founded by Ren Zhengfei in China, the Huawei company is one of the top largest and extremely wealthy mobile phone companies in the world.

The popular phone brand, Huawei has its headquarters in Shenzhen, China and it has employed over 197,000 People in the company.

Another supper wealthy phone company in the world is Motorola.

Motorola was founded by Paul and Joseph Galvin in September 1928 in the USA.

Nokia is not only the oldest phone brand in the world but also one of the richest mobile phone companies to ever exist.

Nokia which was first launched in May 12, 1865 by its founders Fredrik Idestam, Leo Mechelin and Eduard Polón has its headquarters located in Espoo, Finland.

The company has employed over 23,000 people and the company’s headquarters are in Haidian District, Beijing, China.

HTC is one of the richest smartphone companies in the world today.

It was founded by Cher Wang and H.T Cho in Taiwan and was launched in the year 1997.

In December 16th, 2013 OnePlus phones was launched, it was founded by Pete Lau & Carl Pei.

The high end phone company’s headquarters are located in Shenzhen, China and the entire company has employed over 2,500 people.

Tecno is not only one of the most popular Android phones but also one of the richest phone brands in the world today.

Tecno Mobile was launched back in 2006 in China by its founder George Zhu.

Tecno Mobile has the headquarters of the company in Shenzhen, China.

The mobile manufacturing brand, Tecno has employed thousands of people.

Manufactured in China and launched in 2009 by its founders Duan Yongping and Shen Wei, Vivo has employed over 10,000 people.

The high-tech mobile brand Vivo is among the largest smartphone brands in the industry.

China phone brand OPPO Is among the top phone brands in the world today and currently one of the wealthiest phone manufacturer brand.

Oppo headquarters are in Dongguan, China and the company has employed over 41,000 People.

Alcatel (powered by Nokia) is also one of the top mobile phone brands.

The phone manufacturer brand was founded by Pierre Azaria in France and was first launched in November, 30th 2006. (Defunct: 3 November 2016)

Alcatel headquarters are in Nanterre, France.

Android phone brand Realme was started in May 2018 by its founder Sky Li, in China.

Headquarters of Realme are located in Beijing, China.

Sony Mobile Phones are popular in many countries but they are not as popular as Sony electronics such as Sony TVs, Refrigerators, Speakers and other home and kitchen appliances.

Sony mobile phone was founded by Sony Corporation in Japan, October 2001 and its headquarters are located in Tokyo, Japan.

The company has employed over 112,000 people making it one of the largest phone brands in the world this year.

These are the top richest phone manufacturers brands in the world, as of this year.

These are also the world’s largest phone companies today with respect to their estimated net worth and company value.

NB: The net worth indicated above is an estimation which might affect the rankings of the mobile phone companies above if certain factors are considered such as a company’s yearly production unites, yearly sales and the company’s revenue per year

Content created and supplied by: Teckmo (via Opera News )

Say Goodbye To Facebook - New Name To Be Unveiled Soon.

I Just Received A Sad News; A Lovely Woman In My Heart Has Passed On- Captain Smart Confirm In Tears

All That I Said Was Out Of Ignorance; Forgive Me I Was Misinformed - Captain Smart.