Officially, you aren't allowed to have two social media accounts on one phone. But, since most phones now come up with dual-SIM technology, its not uncommon for users to want to set up both numbers with WhatsApp, Twitter, Facebook or Instagram, even though they only have one device. 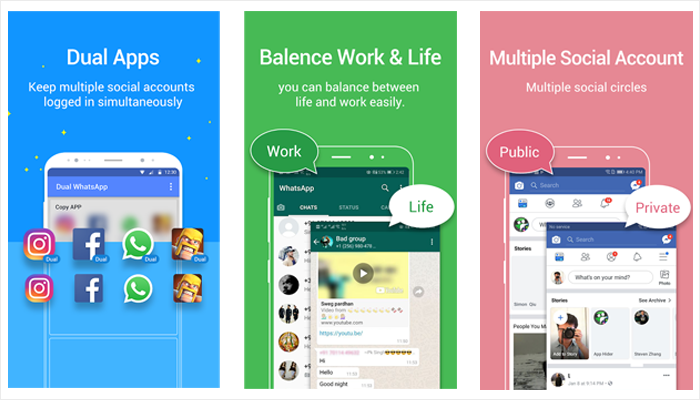 So what if you want to run two WhatsApp accounts on one phone. Is it possible? Yes, it is but only if you are an Android user. This special feature is not available for iPhone users.

Many Android phones come with a feature called Clone app or App twin. Most of the phones, especially the Chinese made phones like [Xiaomi, Gionee, Vivo, Oppo, Samsung, Honor, Huawei] come with this feature. You will require this feature to run two social media accounts(WhatsApp, Twitter, Facebook, etc) on one phone.

If you are using an Android phone that does not automatically have this feature, then you are required to install one of these from Play Store [app clone , dual app, parallel space, multiple space, 2Face, etc].

Here is the procedure you are required to go through.

1. Your phone must have a dual active Sims.

3.1. If you are using a phone like Tecno, Infinix, Itel, Arcatel, etc, that has not this feature, you are expected to download any of these apps from Google Play Store[Dual Account, Parallel Space, Multiple Space, 2Face, app clone, dual app, etc]

4. After installing any of the apps in [section 3.1.] from Play Store, You should open it and you will see a list of apps that support the dual feature. Turn the toggle on for (WhatsApp, Twitter, Facebook, Instagram, etc).

5. Now to set up the second App(WhatsApp, Facebook, Twitter), start the App by selecting it. That is , you are to go through the same process of opening a new account for any social media App.

7. Now when the app asks for your phone number, remember to give your second phone number. This will allow you to run two social media App accounts with different phone numbers on one phone.

Leave a comment and I will get back to you.

Drinking Too Much Processed Drinks Is Bad For Your Health, Try This All Natural Drink Instead.