Galamsey, how we got here and the way forward from here.

By NouvalDavid (self meida writer) | 1 months

Ghana remains a very rich country in Gold.True, but we are also very rich in bauxite, diamonds, manganese, oil, timber, cocoa, coal, and so on.Every so often on the front pages of the newspapers, headlines on news, government talks, cause of many controversies on the social media and every other place of talk.

Ghana was called the Gold coast by the British, because of her sufficient reserve of Gold.During the colonial era, mining of the gold reserves was under the control of the British colonialists.

What is galamsey?This is a local term if when translated to English means "gather them and sell."Galamsey is the name the locals call illegal mining.Unlawful mining in Ghana typically falls within the illegal Artisanal Small scale Mining (ASM) and not in the larger scale. 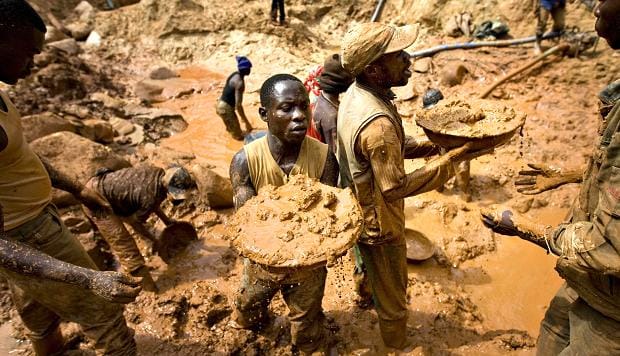 Alarming but true, there are unknown illegal miners within the shores of Ghana.According to Centre for Social Impact Studies (CeSIS)'s Richard Ellimah, there is an estimated amount of Five hundred thousand(500 000) illegal miners currently operating in Ghana."I think the politicians are involved; our chiefs too are involved.The police will not do anything, and you realize the military too will not do anything."says Richard Ellimah as it was communicated in the African report by Billie Adwoa McTernan and Patrick Smith.

Over three million (3 000 000) people depend on illegal mining for a living.The women who are porters, the men who are diggers, the machine operators the illegal gold buyers in the black market, the family back at home those involved cater for, and so forth.

Obviously, there are causes of illegal mining.What could make someone of sane mind do what is deemed illegal?Listed below are some of the possible reasons:

Unemployment of the youth

Need for survival/lack of enough funds.

The love of money, and so on.

Illegal mining is dangerous, because of the fact that it is illegal to mine in the country without proper licencing.

Many of these illegal miners are afraid to do things the right way because to cut costs of production.This makes them mine with poor conditions and faulty machines.They do not want the supervision of the government officials, because they do not want to do things the right way.This is way more dangerous because it can cause a disastrous environment.Just like the worst in the Ghana history, where by a dug-out illegal mine collapsed and killed eighteen (18) workers including thirteen (13) women porters on 13th November, 2009 in the Ashanti Region

Areas of excessive mining sites have a higher population of poorer people compared to their neighbouring farming communities.This is because of the environmental conditions they live.How?The cost of living ridiculously increase and the water bodies are poisoned with mercury.The lands which were previously mined will be abandoned because nothing can be farmed on it any more.Many cocoa farm lands are destroyed as a result of the mining if gold is discovered in the soil.

How we got here

Creation of the law

An action can only be called illegal unless there is an Act or Law against it.It all started on 19th April, 1989 with The Small-scale Gold Mining Act(P.N.D.C.L. 218).This act called for the licensing of Small-Scale Mining.The very first article of the Provisional National Defence Council (establishment) Proclamation, 1981(P.N.D.C.L. 218) stated that all small scale miners must be duly registered and licenced by the secretary for lands a natural resource or by an officer authorised in that behalf by the secretary.

This law was created as at the time when only nine small-scale miners were working using panning and the dig and wash method of mining.It was insignificant at that time.

Over dependence on that sector

Gold digging is a tedious work, yet quite profitable.Gold is valuable as at today, 18th May, 2021, the price of one kilo of gold is $59 316.75.If converted to Cedis is ₵341 961.06.The price of gold is really convincing and gold being a heavy metal one may stumble on a big nugget one day.This is what has led to the dependence on Gold.Ghana does not only have gold as a natural resource.

With the increasing high rate of unemployment, an opportunity to scavage gold may be the only choice for an unemployed youth.

Security of a job

Survival is key.When one is working at a firm whereby, the conditions of securing their job are very slim.Such an individual would have no choice but to be involved in illegal mining.

The Ideology that we own the government

Some people hold the notion that they can either bribe their way through or be favoured because they are members of a political party.

Honestly, illegal mining need to stop.It is risky and has more risks than quite alot of other jobs.It causes environmental disasters and destruction of our lands and the poisoning of our water bodies.How do we stop this menace?

Galamsey can be stopped if;

the standard of living appreciates.

the government intervenes in the personal livelihood of the masses.

small scale miners are registered by reducing the cost of licensing.

Mining in Ghana has come to stay. So, let us make it right.