You Took Bribes To Collapse Unibank; Dare Me And I Will Mention Your Names- Kwame A-Plus Threatens 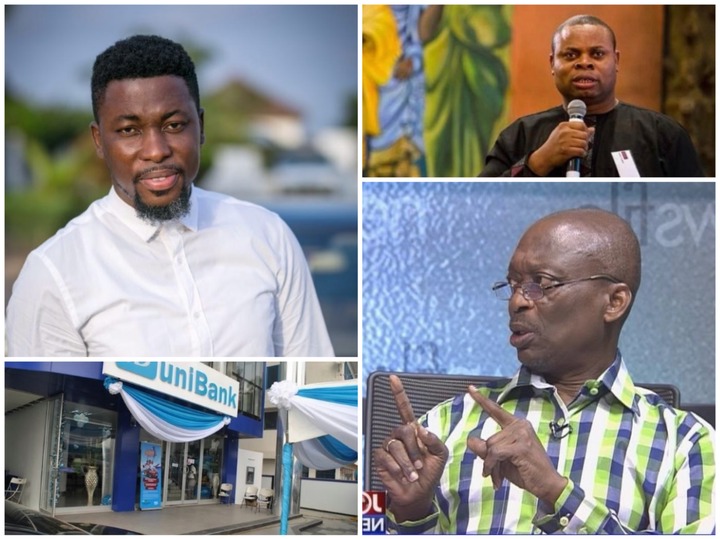 Controversial businessman and social media commentator, Kwame A-Plus has threatened to name all those journalists and public figures who allegedly took bribes to support a media campaign for the collapse of Unibank. According to him he has a list of those people including some top two journalist, one of whom he hinted was an additive cigarette smoker.

On his Facebook post, Kwame A-Plus indicated that except for Abdul Malik Kwaku Baako Junior, and Franklin Cudjoe who he could vouch for not having taken these bribes, the others [unnamed] cannot exonerate themselves of the accusations. He argued that most of those actors who joined the bandwagon to have Unibank collapsed among other defunct banks which have now been merged into the Consolidated Bank of Ghana, were with pressure group; Occupy Ghana.

He chastised the government and Occupy Ghana for having led such an adversary action on an indigenous bank describing it as "the most stupid decision ever taken in this country." Kwame A-Plus intimated that he had knowledge of some 'unjustified' payment these peoplw have been taking from the Consolidated Bank of Ghana, ever since Unibank was collapsed. 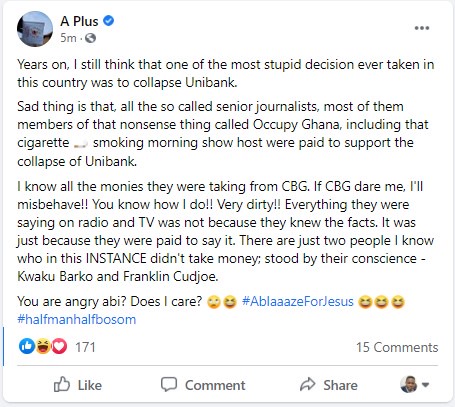 He threatened to name all those involved should anyone dares him. Kwame A-Plus stressed that all that were said on various media was nothing but a plot to rundown the bank.

"I know all the monies they were taking from CBG. If CBG dare me, I'll misbehave!! You know how I do!! Very dirty!! Everything they were saying on radio and TV was not because they knew the facts.

"It was just because they were paid to say it. There are just two people I know who in this INSTANCE didn't take money; stood by their conscience - Kwaku Barko and Franklin Cudjoe," he wrote on his Facebook page.

The descriptions as provided by Kwame A-Plus could lead some curious Ghanaians to identify which journalist he was referring to as being complicit in this agenda of collapsing Unibank.