By SamuelPowellNews (self meida writer) | 12 days 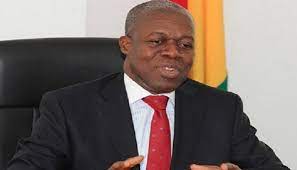 The then Vice President Candidate of the New Patriotic Party (NPP), Dr Mahamudu Bawumia was trusted by many Ghanaians to be the solution to Ghana's economical problem because of his economic background and how analysed and explained economical issues in Ghana even though he has practically not handled any economical issues of the whole country before. His opinion on Ghana's economy was very convincing that many Ghanaians believed that when the NPP take over the mantle with him as Vice, the country's economy will see massive improvement.

When NPP was campaigning in 2016, Dr Mahamudu Bawumia threw a challenge to the then Vice President on the ticket of the National Democratic Congress (NDC), the late Paa Kwesi Amissah-Arthur, who was also an Economist. According to Dr Mahamudu Bawumia, the gross economic mismanagement by the ruling NDC was to be blamed for the hardship in the country.

This seemed like a propaganda speech at that time but most Ghanaians believed it because they actually thought that the analyses of Bawumia on the economy at that time was the best. Dr Mahamudu Bawumia threw a challenge that Paa Kwesi Amissah and his economic team should answer 170 questions he has gathered about Ghana's economy from his books. If they are able to answer, it means they know how to manage a country economy but if not then it means they lack understanding of the economic management of a country. 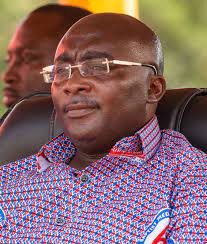 When the Amissah-Arthur economic team took a long time and there was no response, Dr Bawumia stood in Gbawa College of Education in the Upper East Region and said that "The Vice President Paa Kwesi Amissah-Arthur and the economic management team went into hiding, they said they will answer at the right time and now they say these are not questions. I [Bawumia] challenge the vice president Amissah Arthur, prove your words as an economist, and address these 170 statements one by one, true or false".

Paa Kwesi Amissah-Arthur later came with a response to Dr Bawumia saying "You have acquired academic knowledge without industrial input. You cannot use textbooks to manage Ghana economy". This statement suggested to many Ghanaians that the Vice President was running away from Bawumia's 170 questions about the economy of the country. 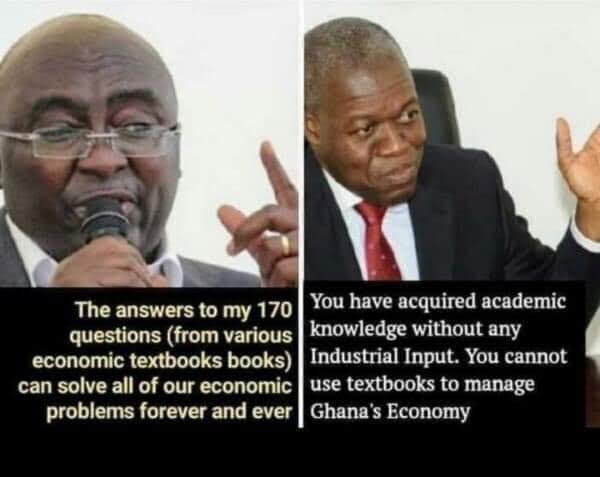 He has replaced the person that he was criticized about five years ago but according to some Ghanaians, the economy of the country is even worst than what it is in 2016. He [Bawumia] claimed to have all the answers to Ghana's economy not knowing his turn will even be worst than before. Now prices of items have drastically increased with a lot of taxes on the neck of Ghanaians. The unemployment rate is very high as many youths struggle to get employed. Ghana cedis is still struggling to catch with the US dollar.

In view of this, some Ghanaians believed that what the late Vice President Amissah-Arthur said about Dr Mahamudu Bawumia bluffing knowledge on Ghana's economy has come to pass. Acquiring book knowledge is different from practising it and that the Amissah-Arthur is vindicated of that attack on him. 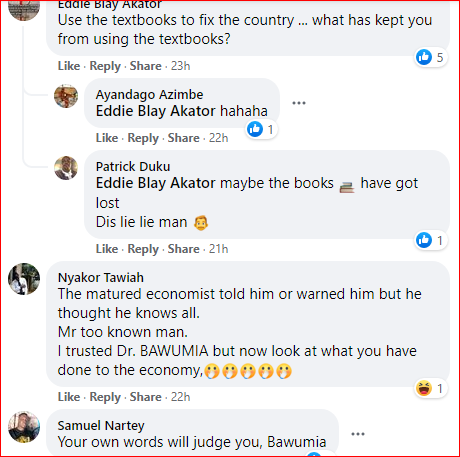 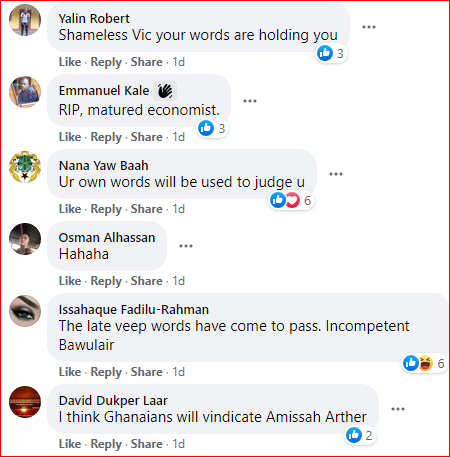