By darlington19 (self meida writer) | 9 days 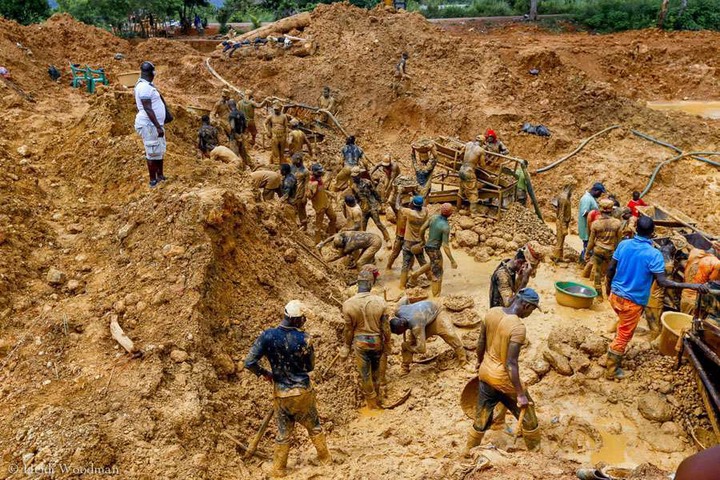 Many more people, including thousands from China, have been drawn into the sector. The Information Minister recently claimed there are now 200,000 people engaged in galamsey, while other sources suggest nearly 3 million rely on it for their livelihoods.

Locally, the practice contributes to surges in crime and violence. Nationally, it represents huge sums in lost revenue and exports.

In its electoral campaign, the NPP pledged to curb galamsey. And since coming to power, various media campaigns have ensured the new government keeps to its word.

operations over the years have destroyed most of our agriculture lands, as well as polluted many water bodies in Ghana. This has subsequently led to water shortages in some parts of the country. The saddest part of this is that most of these illegal galamsey operations are carried out by Chinese nationals who use heavy machinery in their illegal activity. To add insult to injury, some of these Chinese galamsey operators have their own armed private security personnel who harass and intimidate locals. This poses a major risk for national security. The galamsey menace is, therefore, one that has to be ruthlessly dealt with. On the contrary, it has been reported that our Minister For Lands and Natural Resources, John Peter Amewu, on Monday in the quest to solve this social canker held an emergency meeting with the Chinese Ambassador to Ghana, Sun Baohongand, and BEGGED her to help address this issue – a move that was totally needless and even unacceptable! The laws of the country on illegal mining are clear, and they restrict foreigners from engaging in small scale mining. What those Chinese nationals are doing is therefore a criminal act and must been seen as such. We are asking the Minister to enforce our mining laws and stop begging the Chinese Ambassador to Ghana to help. The galamsey problem is a Ghanaian problem not a Chinese problem and must be solved with Ghanaian laws.

Galamsey, and the informal communities it creates, is associated with a rise in crime and violence. Police have said that the number of armed robberies has risen in illegal mining areas, often with guns brought in by the Chinese to protect themselves.

Along with the growing presence of weaponry, the trafficking and use of narcotics has also increased. Another senior police official told the authors that a proportion of the cocaine and methamphetamine trafficked through Ghana is directed towards galamsey miners. He explained that workers use these drugs in order to “give them courage” and help survive long hours in dire conditions. Such drug use proliferates in informal and illegal gold mining camps in South America. As Ghana becomes a key narcotics trafficking transit state, patterns repeat themselves.

As profits and goods from galamsey enter the supply chain informally, there is also a high risk that proceeds will be diverted towards other crimes.

Moreover, galamsey can set in motion a vicious circle in terms of employment. Mining often occurs in cocoa farming regions and can lead to the seizure of land and environmental destruction. Both of these outcomes further erode the viability of agriculture, leading to the local population’s deepening dependence on illegal mining for income.

Seeking to ban metals mining, or even artisanal small-scale mining alone, thus ignores the key role the sector plays in providing livelihoods for the most vulnerable. This is especially the case in a country where unemployment amongst 15-24 year-olds stands at around 50%.