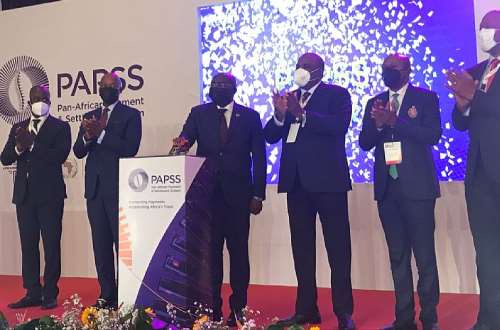 The Vice President of the Republic of Ghana, H.E Dr. Mahamudu Bawumia on Thursday, January 13, 2022, had the honour to lead the commercial launch of the Pan-African Payment and Settlement System (PAPSS) in Accra as a special guest of honour.

The ground-breaking innovative initiative is set to provide the platform for connecting payments across the continent with no stress in order to accelerate Africa’s trade to inspire growth, develop, as well as transformation.

This is set to give the African Continental Free Trade Area (AfCFTA) a massive boost as the continent comes together to do business with ease.

PAPSS has commercially come into play to champion the elimination of intra-African financial borders, connect African markets to each other, enable local currencies to be used, alleviate the need for offshore clearance and settlement of payments.

Speaking at the launch of PAPSS in Accra today, H.E Dr. Mahamudu Bawumia who represented President Nana Addo Dankwa Akufo-Addo said he is confident that the socioeconomic benefits for citizens of participating countries and to the large extent the entire continent will be enormous.

Ghana’s Vice President while commending the pioneers of PAPSS stressed that it is an African Solution to an African problem.

“The PAPSS which will allow member states to transfer funds within Africa on the same day and at a lower cost is set to benefit Africa’s exporters and importers by providing a faster, safer, and secure transfer of funds.

“My humble opinion, PAPSS is an African solution to an African problem and it is the most practical and the most important achievement in payment system integration on the African continent since independence from colonial rule,” Dr. Mahamudu Bawumia emphasised.

He said it is the closest Africa has come to achieving a common currency, hence Africans should be very proud of this feat, demonstrating that technology can solve many problems.

Speaking at the commercial launch of PAPSS, the Secretary General of AfCFTA, H.E Wamkele Mene described the event as timely, noting that he has no doubt about the positives it will spread across the continent.

“The commercial roll-out of the PAPSS today is, therefore, timely and set to boost intra-Africa trade significantly by making cross-border payments less reliant on third currencies and is set to save the continent up to US$5 billion dollars annually, which is the amount currency convertibility costs Africa.”, he said.

H.E Wamkele Mene assured that as a secretariat, the AfCFTA remains committed to a continued partnership with the Afreximbank and other continental institutions in developing tools that create an enabling environment for the successful implementation of the AfCFTA, for the achievement of the economic transformation and industrialization of African economies.

Delivering an address at the launch, CEO of PAPSS, Mr. Mike Ogbalu III said he is delighted that the system which has gone through testing and piloting within the West Africa Monetary Zone (WAMZ) is finally going live across the continent.

“Allow me to emphasize that PAPSS is not designed to compete with or replace our existing payment systems. PAPSS is designed and operates to facilitate the connectivity at a continental level that brings all payment systems together into one network that is interoperable, efficient and affordable," Mr. Mike Ogbalu III shared.

He said with the system designed to make African currencies regain value and to domesticate intra-Africa payments coming into full force, the continent is on a journey towards prosperity.

“PAPSS as a core payment infrastructure provides the superhighway which connects others to reach every part of this continent. Together, we create the Africa that We Want,” Mr. Mike Ogbalu III shared.

Taking his turn to speak at the launch, the president and Chairman of the Board of Director of Afreximbank, Prof. Benedict Oramah gave the assurance that his outfit will continue to play its role to strengthen trading in Africa.

He reiterated that while PAPSS will surely strengthen African currencies, it is just the beginning of bigger things to come to make the continent greater.

Prof. Benedict Oramah emphasised that through PAPSS, “We will make intra Africa trade most attractive and also create employment for the people.”

The Pan-African Payment and Settlement System (PAPSS) is a Financial Market Infrastructure that has been developed and initiated through a collaborative effort of the AfCFTA Secretariat, Afreximbank and the African Union Commission, working together with the West African Monetary Institute and associated central banks in the West Africa Monetary Zone.

It is designed to ensure instant payments for goods and services between African jurisdictions, payments are initiated and settled in the local currencies of initiators and beneficiaries immediately eliminating the need for third (hard) currencies to consummate trade within our region.

This is expected to save the continent over US$5 billion in payment transaction costs every year. PAPSS will facilitate and help drive the enormous growth in intra-African trade resulting from the African Continental Free Trade Area’s creation of a single market throughout Africa.

It will facilitate the payment, clearing and settlement system for intra-African trade; simplify intra-regional transactions; and reduce the cost, duration and time variability of cross-border payments.

The Five Proven Ways To Be The Best In Someone's Life

Nursing Training Forms For 2022/2023 Academic Year. Check How To Apply And Closing Date

Ken Ofori-Atta reports that the Agyapa deal has been renewed.

Why Everyone Has Money Issues, But Nobody Is Talking About It

Video: Kabila Finally Told The Bishop What He could Have Said To Save Himself From The Ghanaians