The reason for the sudden drop of bitcoin finally Revealed. Will bitcoin loss its value (See detail)

By DoraNewsgh (self media writer) | 8 months ago

On Wednesday, the flagship cryptocurrency hit more than three-month lows, falling to around $30,000 at one stage.

The recent decline follows a sharp increase that began in the second half of last year. 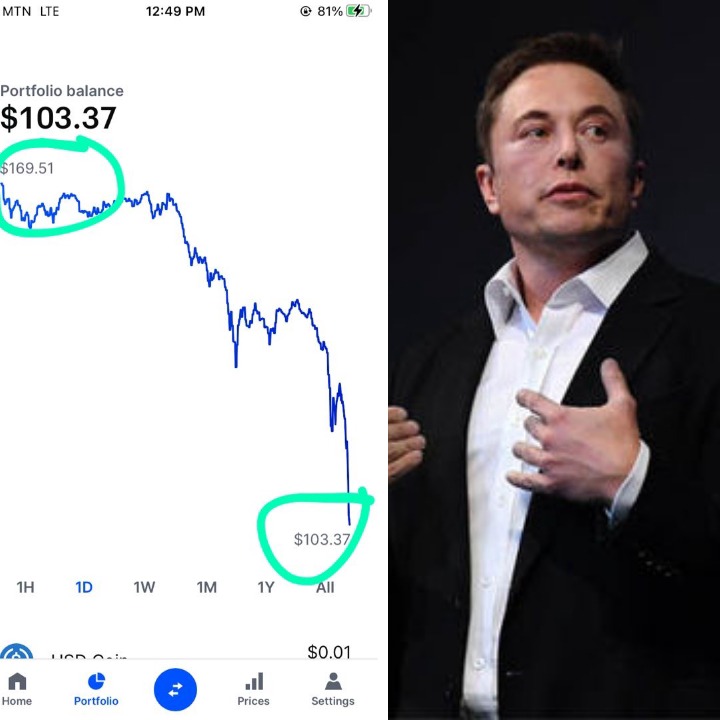 Part of bitcoin's weakness appears to be a temporary turnaround of wider acceptance, as well as regulatory issues and weakness in more speculative areas of financial markets.

The sharp drop in bitcoin and other cryptocurrencies comes as a flurry of negative news and catalysts, ranging from Tesla CEO Elon Musk to a new round of Chinese government legislation, have hit an asset class that has been marked by unprecedented volatility since its inception.

The recent decline follows a sharp increase that began in the second half of last year. Bitcoin's price has risen by more than 200 percent since September, thanks to a dramatic bull run fueled in part by hedge fund managers, banks, and other businesses embracing cryptocurrency.

"A lot more people own crypto. Crypto has seeped into pockets all over our culture, and you had a confluence of events. Tax Day, Elon Musk tweets, and other things started breaking down the positivity in the market action, and now we've got a liquidation case," said longtime bitcoin bull Mike Novogratz on CNBC's "Squawk Box" on Wednesday.

A temporary change in the theory of wider acceptance for cryptocurrencies seems to be part of the explanation for bitcoin's weakness.

Musk revealed earlier this year that he was purchasing more than $1 billion worth for his automaker's balance sheet. Several payment companies revealed that they were expanding their crypto capabilities, and major Wall Street banks started forming crypto trading teams for their clients. Coinbase, a cryptocurrency exchange, went public in mid-April through a direct listing.

Musk, on the other hand, announced last week that Tesla would no longer allow bitcoin as a form of payment due to environmental concerns. Tesla is not selling its current bitcoin holdings, he said on Twitter on Wednesday, using emojis to claim the company has "diamond hands."

And Coinbase, which soared above $400 shortly after its initial public offering on April 14, rapidly gave up those sales, trading around $220 per share on Wednesday morning. Its direct listing date coincides with the most recent all-time high for bitcoin.