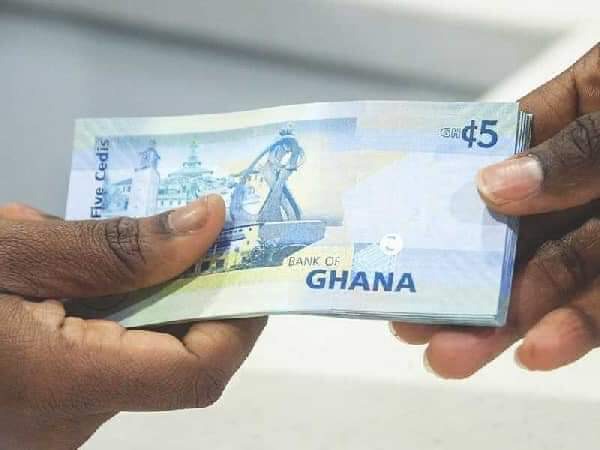 The act of kindness is not dead in humans, because there are several people walking with a gold heart. An example of such man, is Lamprey Isaac. Lamprey has been given an award he wasn't looking forward to, after he returned a wallet which belonged to a stranger. Lamprey was walking on the Lapaz stretch road, the main road that leads to Kasoa, Cape Coast and other cities, when he came across a dirty folded rubber on the ground. He was coming from town, after attending a tedious interview for a job position he didn't even get. Lamprey stepped on the dirty rubber and didn't even know it was a wallet.

He turned back to see what he stepped on, but couldn't see because of the dark. He switched on his flash, and saw a dirty folded rubber on the ground. People have been walking all over the wallet and never care to open it. Lamprey took the wallet and to his surprise, there was no money in it. His first call was to throw it away, but something told him to hold it back. Lamprey hold the wallet back, placed it inside is bag and went home. He tried taking a careful look at the wallet, and that was when he came across series of ID cards, kept in a zipped area of the wallet.

He found American identity cards and permanent resident cards in the wallet. He didn't know what to do with the cards and slipped it under his bed. That was on 2 February 2021, it was Tuesday. The wallet which belonged to Ibrahim, went missing on the 6 of January 2021, when Ibrahim went to Stanbic Bank to make transactions. He was driving from West Hills mall to Accra, when he made a stopover at Lapaz to cash some money. He went to the ATM, took his ATM card from the wallet, and made the withdrawal using the machine. Ibrahim did not place the ATM card back into his wallet, but tried putting the wallet back to his back pocket, of the jeans he was wearing.

Unfortunately for Ibrahim, the wallet did not position well into his back pocket, and fell to the ground as he made his way back to the car. Ibrahim found out the wallet was missing and did all he could, but still couldn't locate the wallet. There was no money in the wallet, but it was filled with more precious cards than money. Ibrahim keeps his SSNIT card, permanent resident card, office clearance card and his foreign ATM card in the wallet.

He was devastated when he couldn't find the wallet, because of the highly demanded items the wallet had. Ibrahim has stopped even thinking about the wallet, and was thinking how he was going to get all the important cards, once he returns to the US. Unfortunately for him, he needed his permanent resident cards and SSNIT card to confirm certain cards, before a new one could have been issued. But all these cards were in the wallet, when it got missing.

Lamprey forgot about the wallet under his bed until yesterday, when he was looking for a particular shoe under his bed. He found the wallet and couldn't even remember where he found it, until he opened it again. He found a foreign emergency contact, which he called last night. It was the wife of Ibrahim who answered the call, and through her, Lamprey found Ibrahim at West Hills residential area this morning. Ibrahim was full of excitement when Lamprey offered him the wallet. Out of gratitude, he offered Lamprey 5,000 for his generous heart.

Many would have thrown the wallet away, without bothering to care about the particulars inside.

Joy And Happiness As Nana Agradaa Have Be Granted Bail? She Mocks Those Who Wanted Her To Be Jailed.