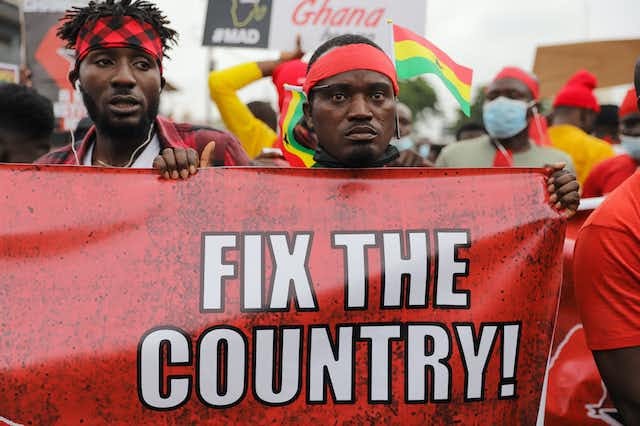 Ghana is again seeking assistance from the International Monetary Fund (IMF) to enable the country to meet its payments to the rest of the world and restore the health of government finances. It is the second time in the past three years and the 17th since independence in 1957 that Ghana has turned to the IMF for help.

The latest foray reverses the current administration's earlier stance that it would avoid approaching the multilateral body because of the conditions that come with its assistance. Ghana's finance minister Ken Ofori-Atta said in May 2022 that the government was "confident in its homegrown solutions such as the e-levy in getting the economy to recover ... seeking a bailout from the IMF is not an option".

Ghana's approaches to the IMF, which have averaged every four years over the past 65 years, tell a story of recurrent failure of the government to properly build the economy to withstand internal and external shocks. Ghana's lack of fiscal discipline, and its recent history of dependence on foreign financing – with as much as 48% of the total public debt being held by external investors – leaves the country vulnerable to swings in investor sentiment, and accompanying portfolio investment selloffs.

The request to the IMF also underscores the fact that Ghana has much deeper structural economic problems. These require a multi-stakeholder approach to resolve. Unfortunately, the pervasive and deeply entrenched nature of the country's Fourth Republican clientelist politics which manifests in a 'winner take all' approach to governance has often distorted a much-needed national debate on what needs to be done and how it must be done. Ghana must fix the structural problems – such as its over-reliance on primary commodity exports – and live within its means. As we argue in an upcoming research project, there is a greater political leaning towards shorter-term goals of maintaining regime stability or forcing a change in the regime.

Ghana came out of the last IMF program in 2019 with some significant macroeconomic gains.

It had been forced to tap IMF assistance to deal with global and local economic shocks - the same as now. These included the spillovers of the slowdown in China, the 2014-2017 commodity price slump, reckless spending in the lead up to often highly contested elections especially in 2012 and 2016, and a prolonged domestic electricity crisis known locally as 'dumsor'.

Ghana's current external shocks are related to the COVID-19 pandemic and Russia's ongoing war against Ukraine. Internally, the government has also recklessly managed its finances with excessive borrowing, resulting in a looming debt crisis. The country now spends about a third (27%) of its expenditures in just servicing debt alone, not including principal repayments. This is often more than the compensation of workers on the government payroll, estimated at 26% of total expenditure in 2022.

The depth of Ghana's mess

A review of recent economic data shows why it was inevitable that Ghana would seek IMF assistance.

Rising prices have forced the Bank of Ghana to raise its policy rate by 4.5 percentage points to 19% by May 2022 in an attempt to tame inflation. Commercial banks have in turn raised the rate at which they lend to businesses and individuals. The policy rate last hit 20% in January 2018 and drastically reduced to 13.5% until the recent hikes started in November 2021. The unintended consequence of stemming inflation is a potential stifling of economic activity through crowding out of the private sector by the government and high cost of capital.

In addition, the local currency - the cedi - had depreciated by almost 20% against the US dollar as of June 2022, making imports more expensive, forcing prices of goods and services upwards.

Ghana's economic challenges have been made worse by the country's reliance on portfolio flows. This is the foreign money that moves in and out of countries in search of the best investment returns. Unlike money that builds factories, these flows are more sensitive to a country's short-term economic and financial developments. Given Ghana's significant borrowings from commercial rather than multilateral development financiers, the country has become more vulnerable to the rising cost of debt. Multilateral development institutions lend for longer at more reasonable rates.

To add salt to Ghana's economic wounds, rating agencies downgraded the country's sovereign risk scores earlier this year. This significantly limited the government's ability to borrow on the international capital markets to finance the budget.

Ghana's fiscal policymaking has shown a bias towards overspending during good times, with little being saved to help when there are downturns or external shocks.

This is largely driven by commodity price cycles - oil, cocoa and gold - and fiscal excesses during election periods. Ruling parties often overspend ahead of elections to buy votes and then tighten the purse strings afterwards.

So, what should Ghana do differently this time round?

The following could be a guide to ensure that Ghana benefits from its new deal with the IMF:

First, Ghana should use the IMF program to negotiate some debt restructuring with commercial and multilateral creditors. The country failed to take advantage of earlier schemes like the Debt Service Suspension Initiative (DSSI). Debt restructuring would create the space to spend on priorities such as food and fuel. However, the country must urgently reinstate the Fiscal Responsibility Act, 2018 - which was suspended during the pandemic - with the 5% cap on fiscal deficits in any given year. It must also publish an updated medium-term debt management plan that either caps or places a moratorium on the contraction of non-concessional loans for a while.

Second, Ghana must fully implement any agreed structural reforms to put the economy on a sound footing. This includes significant cuts in the largesse and waste in government and public service delivery. The President must cut the size of his government and enforce key performance targets for key socio-economic sectors such as public finances, education, energy, and health, among others. Other reforms should include the aggressive restructuring of state-owned enterprises and hiring of competent hands, removing some, and improvements in the targeting of subsidies as well as trimming the government payroll and flagship initiatives like free secondary schooling. The government must also insist on a strong social protection element, especially for cash transfer programs such as Livelihood Empowerment Against Poverty (LEAP) and capitation grants for public basic schools.

Thirdly, Ghana must aggressively grow and diversify its small open economy to reduce reliance on primary commodities such as cocoa, gold and oil. These are the major export earners for the country but are subject to significant price volatility. Ghana has a great opportunity to pursue green growth policies in new industrial clusters such as the critical minerals value chain and renewables. These can be supported by a reinvigorated Ghana Infrastructure Investment Fund (GIIF) and the Minerals Income Investment Fund (MIIF), among other players.

Lastly, Ghanaians, especially the two main parties, must stop over politicizing the economic issues. Populism is clouding effective decision-making. What the current crisis reveals again is the urgent need for a broad-based national development plan or framework

Content created and supplied by: mojo676 (via Opera News )