TOR and a Top Ghanaian Owned Oil and Gas Firm in a Media FIGHT, After Barely 2yrs of Cordiality.

By MrsBabie (self meida writer) | 11 days

In December 2019, under the then leadership of Isaac Osei at Tema Oil Refinery (TOR), in what could only be described as a very rare achievement, Ghana’s only state refinery, Tema Oil Refinery (TOR) Limited had suddenly become a preferred choice for major oil traders, both local and international who are now seeking for opportunities to process their crude oil at the West African nation’s refinery at a fee, a development hat had started under the previous NDC appointed CEO, Kwame Awuah-Darko.

With the confidence of traders and some finance houses restored in the refinery, TOR, which, hitherto, was in the news for lack of crude, has continuously processed circa 4 million barrels of crude oil out of a total of 11 million barrels since August 2019, as this followed the signing of a tolling crude oil processing agreement between Tema Oil Refinery and Woodfields Energy Resources Limited, a wholly Ghanaian-owned oil trading company, backed by the world’s largest oil and gas trader. Woodfields Energy’s long history with the refinery and knowledge of the energy business in Ghana, in Africa, led them to originate and lead this transaction. 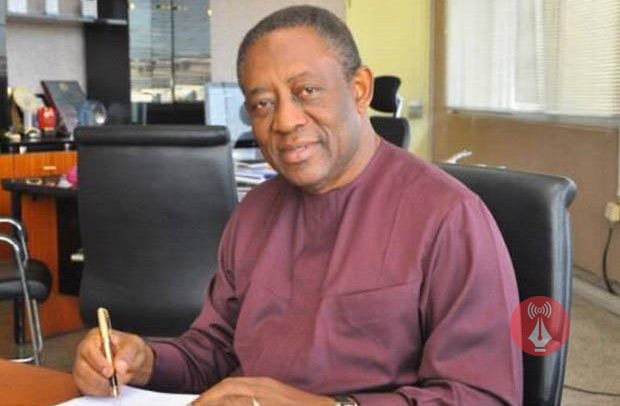 The contract which saw the refinery operating a tolling model where it processed crude oil for/on behalf of third parties at a fee, ensured that, the arrangement places minimum or no risk at all on the refinery as the processor since the crude oil is purchased, transported and marketed by the third party.

Well, fast forward to just the end of last month, the relationship had turned sour, as TOR had accused them of owning, something they denied outright, as Woodfields Energy Resources Limited, the indigenous Petroleum company had stated categorically that, it was not indebted to the Tema Oil Refinery (TOR) to a tune of $5,000,000 and had refused to make payments. 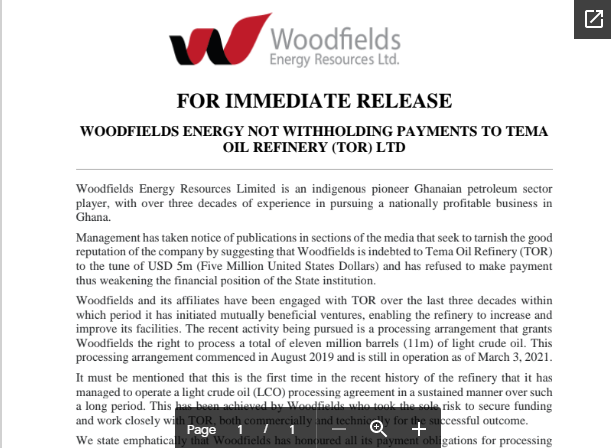 A statement signed by the head of the legal department of Woodfields Energy Resources and copied to the media had said, “Woodfields has honoured all its payment obligations for processing fees to TOR and is not indebted to TOR for any processing fee charges. Woodfields has observed through our stock accounting records certain shortfalls in our product volumes held in tanks at TOR to the tune of about USD5.7M. Per standard practice for processing agreements, we have engaged TOR in a material balance (product reconciliation) to ascertain the shortfall”.

The statement said Woodfields notified TOR in December 2020 of its desire to suspend any payments until after the material balance reconciliation which was presently underway. “However, to demonstrate good faith and in recognition of the reconciliation exercise taking longer than anticipated, we have made payments in excess of $1,000,000.00 to TOR since the commencement of the exercise in January 2021. Woodfields and its affiliates have had consistent engagement with TOR over the last three decades within which period it has initiated mutually beneficial ventures, enabling the refinery to increase and improve its facilities.” the statement stated.

Repeating what is already known and stated above, the statement said that, "the company said in August 2019 it started a processing arrangement with TOR that granted it the right to process a total of eleven million barrels of light crude oil, which is still in operation as of March this year. It must be mentioned that this is the first time in the recent history of the refinery that it has managed to operate a Light Crude Oil (LCO) processing agreement in a sustained manner over such a long period. This achievement spearheaded by Woodfields which took the sole risk of securing funds and worked closely with TOR, both commercially and technically for the successful outcome,” the statement explained.

The statement called on the general public, well-meaning members of society and industry players to completely disregard any publication that seek to paint a wrong picture as to the nature and style of the company and its operations in the country. Interestingly, in a sharp rebuttal today, the Tema Oil Refinery (TOR) is questioning the basis for Woodfields Energy Resources’ conclusion that there is a shortfall in its product volumes held in its tanks, as according to TOR, it is improbable to arrive at such a conclusion since “at no point in the ongoing product material balance between TOR and Woodfields has any shortfall been established.”

TOR therefore vehemently denies and resists this assertion coming from them, when TOR's statements read that, “Tema Oil Refinery, therefore, rejects, in no uncertain terms, the erroneous impression being created by Woodfield that it has caused such a shortfall in their products in TOR tanks.” The statement signed by TOR’s Corporate and Public Affairs Manager added that it will, however, not resort to ways that will mar the relationship between both entities. “TOR values the professional relationship established with Woodfields and all our clients and will therefore not resort to ways that will jeopardize same,” the TOR statement added.

TOR currently has a new leadership, as Isaac Osei had resigned late last year. One is left to wonder, what may be the real rift now, in a relationship that was once praised and adored by representatives of both firms.

Epilepsy In Children: Five Things You Should Never Bring Closer To An Epileptic Patients

All Customers Should Take Note Of This Important Announcement From GCB