Former Finance Minister, Seth Terkper says the current finance minister Ken Ofori Atta has to be blamed for the current economic malices in the country.

He thinks that the finance minister Ken Ofori Atta is the reason for going to the IMF late for a bailout in the current economic dispensation.

According to Mr. Terkper, “if you read the MPC reports, it kept pointing to the fiscal deterioration using points of policy credibility. The last straw was our downgrade from B category to C. If this was not alarming enough to authorities, then what should be alarming?”

He said that he is surprised by the adamancy of the finance minister which was eventually corrected by the President. He thinks this is the best way because the government has run out of options to stabilize the economy

“In the past, when we went to the fund, we didn’t get to this level. What is surprising was the adamancy of the Minister of Finance [which] had to be corrected by the president because looking at the numbers, it wasn’t good. The situation was getting dire and the government was running out of options, and it was time to consider an IMF policy option as a credible one,” he said. 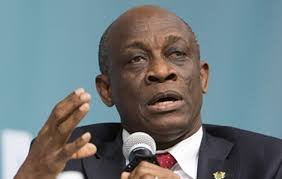 However, the MP for Assin Central Kenedy Agyapong disagrees with the opinion of the government for going to the IMF for a bailout which he said is like handing over power to the NDC.