BOG To Use Helicopters To Circulate Cash Instead Of Bullion Van

By Blingwilliams (self media writer) | 7 months ago 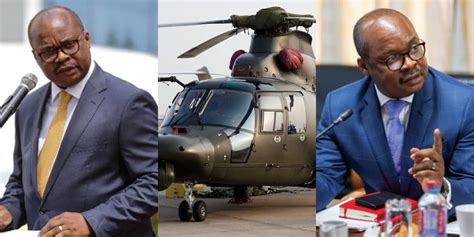 Last year, Dr Ernest Addison, Governor of the Bank of Ghana, stated that the Vice Air Marshal was supporting the Central Bank to transport cash to bank using helicopters arcoss the country to prevent robbery attacks.

He explained that the robberies were carried out by criminals on bullion vans in the country.

Responding to the question of central bank measures in order to deal with the recent attacks on bullion vans, Dr Addison stated that the BoG took note of these attacks and that steps had been taken to address the threat during a press conference in Accra at the Monetary Policy Committee on Monday, 28 September 2020."This is approximately the third time we've had that sort of incident," said Dr. Addison. All of them use the vehicles that have been transformed into bullion vans by Nissan pickup trucks .

"It is an issue handled seriously by the Bank of Ghana. I think last week,Securities met the banks last week to determine the way forward.

"We have a fairly decent fleet of bullion vans and urge them to examine how we cooperate with banks to make money transportation around the country more safe.

"I also met the Air Vice Marshall, offering to help the bank lift money throughout the country by utilizing some of the planes they had. There is a lot of work being done to improve carrying currencies around the country.

A horrific attack on a bullion truck on Monday, June 14, 2021 resulted in the death of a police officer and another man nine months after Dr Addison has declared this. After the incident, James Oppong-Buanoh, Inspector General of Police, had remitted banks to provide strengthened armored vehicles to bear money till the end of June of this year.

He said that if the banks refuse to comply with his instruction, the police will withdraw their policemen.

The IGP urged the Association of Bankers in a statement to 'provide fortified armoured vehicles for carting currencies by the end of June 2021 as previously agreed between them and [Ghana] Police, lest the police remove their escort duties.'

He also directed the Director General of the Ghana Police Service,Criminal Investigation (CID) to investigate the attacks.

Content created and supplied by: Blingwilliams (via Opera News )