Africa Is Building A $6 Billion Mega City In The Sea

Imagine an Atlantis-like Megapolis rising from the sea, an urban development similar in size to New York's Manhattan that boasts thriving businesses in residential districts to transform not just one city but an entire country. It sounds quite utopian, but one country in Africa is building such a city from scratch join me today, as I explore this billion-dollar Megaproject that has become one of the most discussed development projects in the world.

Eko-Atlantic City, also known as Nigeria International Commerce City is a great new coastal city being built on Victoria Island next to Lagos, Nigeria. It is being built on land reclaimed from the Atlantic Ocean, mainly to solve the chronic property shortage in the world's fastest-growing megacity. 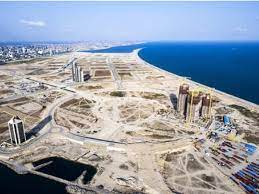 Initially conceived in 2003 as a solution to environmental hazards arising from the flooding of Lagos Bar Beach. The construction of the Eko-Atlantic Project began in 2008. The city stands on 10 million square meters of land rested from the ocean and is protected by an 8.5-kilometer-long wall.

Having a total of 10 districts, it is projected to be the size of Manhattan's skyscraper District. The city will be self-sufficient and sustainable, including modern urban design, its own power generation, clean water, Advanced telecommunications, and efficient living standards.

Over the years, the Eko-Atlantic Project has evolved into housing, one of the most expensive real estate locations in Africa. It is a central point for investors who benefit from rich development growth based on massive demand and a gateway to the continent's Emerging Markets set to become the next generation of Real estate in Africa. 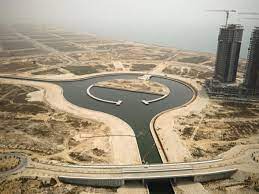 Eko-Atlantic City combines residential, commercial, financial, and tourist accommodations in a location powered by state-of-the-art high-tech infrastructure. The construction of the city was offered to China Communications Construction Group, a company that works in the field of marine dredging and landfill operation. The first phase of the project, consisting of dredging construction of the dam and sand filling will take about six years over a total length of 6500 meters and an average width of 1260 meters. About 91 million cubic meters of sand will be used in total to construct the base of the city. In addition, Eko-Atlantic is protected by a coastal revetment known as The Great Wall of Lagos, which is a planned 8.5 kilometers long barrier constructed primarily of rock and faced with concrete macropod armor.

South Energyx Nigeria Limited, the developer and urban planning company for the Eko-Atlantic City has unveiled the development plan for the first phase of Urban Development. The buildings to be built in the first phase of the Eko-Atlantic City include a 26-story building that will bear the name of Azuri Peninsula. It will be home to 120 Luxury Apartments.

The development will also include a five-star Marina and Yacht Club with an attractive walkway, high-end shops, cafes, and a wealth of amenities in a curated and sophisticated setting. The architecture will preserve the award-winning Global design and provide the most affordable place to live, work play and invest. The second phase of the project is expected to last two years.

In this phase first-class roadworks, the construction of drainage systems, and an own power plant for constant power supply will be carried out. It will also install a water supply system, sewage network, and treatment systems such as those provided in developed cities around the world. Eko-Atlantic is said to be an antidote to Lagos deepest recession in 30 years.

The city is expected to create 250 000 new jobs and address the housing shortage caused by the growing population. But what makes the development of Eko-Atlantic particularly remarkable is its location, the Plan City directly borders Lagos since Eko-Atlantic was built by dredging and piling up land worth 10 kilometers. The peninsula was virtually non-existent before the project began in 2009.

The result is that Eko-Atlantic looks like an island created out of nothing. The Eko-Atlantic City is said to be at least 40 percent larger than the existing Victoria Island, the city targets 250 000 residents and two hundred thousand commuters who flock to work on the island every day.

As a concession holder and principal developer, Eko-Atlantic City development is authorized to lease any property. It is then up to the investor to build What he wants on his land. According to the set guidelines, Eko-Atlantic will offer the most modern amenities available worldwide today, first-class roads with canals for the drainage of surface water are provided in addition to an enviable sewage collection system.

It is also intended to provide high-quality drinking water that has a sewer network that runs throughout the city and serves the sewage system that flows into a sewage treatment plant to be built on the eastern border. The development includes everything from skyscrapers to luxury apartments, a new financial district, a private power grid, and a shopping boulevard model after New York's Fifth Avenue.

Other features include an independent 24-7 power supply, fiber optic communication links to each property, elevated street levels to accommodate underground parking spaces above groundwater, seamless documentation, and construction permit process, and two large marinas connected by an internal waterway. Eko-Atlantic development is being carried out as a public-private partnership with private companies and investors providing the funding whilst the Lagos State government remains a strategic partner along with the federal government. South Energyx Nigeria Limited is working in strategic partnership with the state and local governments. Well-known National and International Banks succeed in the opportunities quickly with some of Nigeria's largest, including FCMB, First, Bank, Access Bank, and Guaranty Trust Bank partnering with Eko-Atlantic, with support from foreign Banks, BNP, Perry, buff, Fortis, and KBC. Experts say the project will cost at least six billion dollars and a square foot of land in the city is now being sold for nearly two thousand dollars. While Eko-Atlantic will alleviate the housing problems in the Metropolis. Its great potential lies in the economic benefits for the state and the population. With the establishment of the free trade zones and the current dynamic focus on infrastructure development.

Those who need a quieter and safer environment for their operations and business and want to be part of a new border can move to the new city. For Savvy investors, Eko-Atlantic City means much more than just rising land values in Lagos. As Nigeria continues on its unstoppable path to becoming Africa's Financial Capital. An investment in Eko-Atlantic which is presently recognized as the world's most promising growth horizon will open up unprecedented opportunities to unlock the broader potential of the continent as a whole.

There is hardly a project without controversy, and the Eko-Atlantic City is no different. Residents who live nearby criticize Eko-Atlantic City, as the ongoing construction work, has recently caused coastal erosion and ocean flooding. The amount of water displaced from Bar Beach would seep away to another area threatening the coastal landscape of Nigeria.

Moreover, Eko-Atlantic City is often criticized for being very susceptible to rising tides, as it is based on an artificial sand bank right by the sea. The seawater flows through residential areas, floods access roads, and tears down electricity pylons. This has also forced some of the residents to move elsewhere. However, the Great Wall of Lagos is supposed to prevent Coastal erosion and flooding and protect this future city.