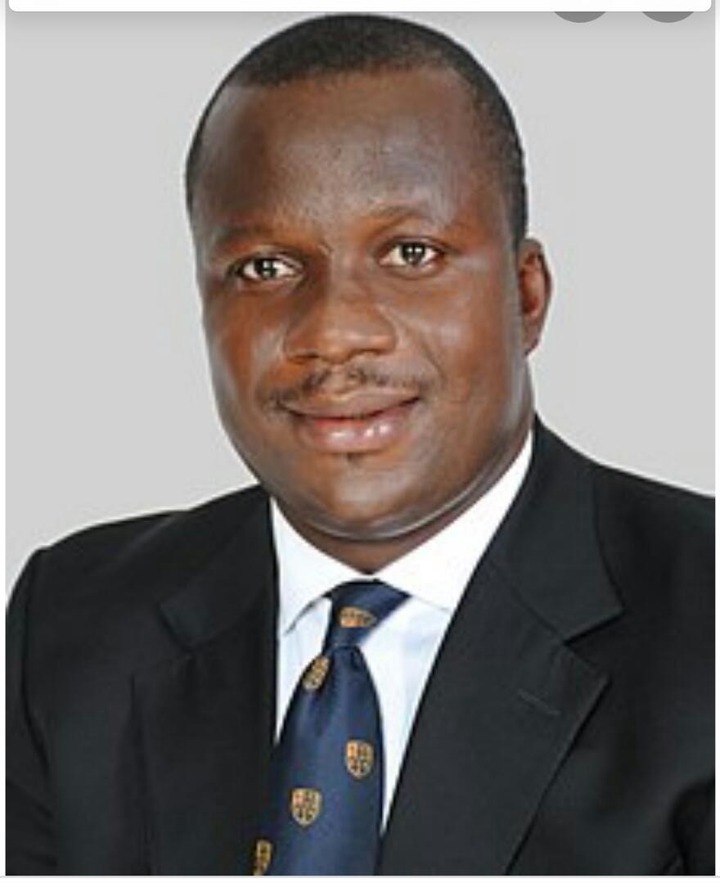 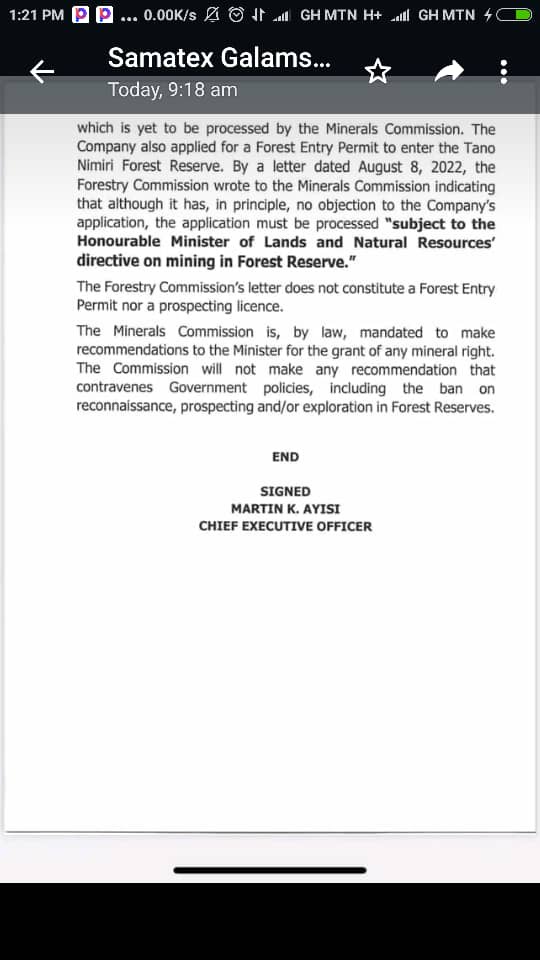 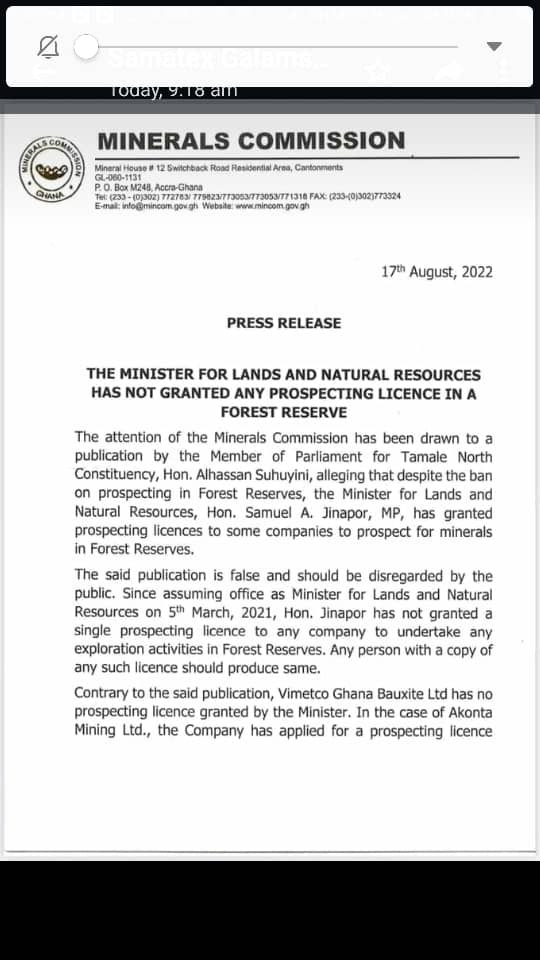 The activities of illegal mining have become one of the major factors that have for sometime now worrying the government on how to find solution to end it.

Several attempts have been made by the government through the recruitments of security task forces to help bring offenders to book but to no avail.

On the face of the ugly ucdevelopment the illegal miners hardly see nothing wrong with their activities that could have negative impact on the economy.

They allegedly continue to violate the mining laws with impunity and go ahead to destroy cocoa farms, other plantations, water bodies among others and go scot free.

It was based on these alleged unlawful activities that a leading timber and plywood company at Samereboi in the Western Region, Samatex Timber & Plywood Co. Ltd, has threatened to lay off 2000 of its workforce.

‌A source close to the company alleged that management have also decided to cut off assistance they give to the residents in their catchment areas like the hospitals, power, roads, water among other facilities if the illegal goldmining activities continue to interfere with their operations.

‌At the time of going to the press the residents confirmed about the company's decision to curtail the assistance that they have been giving to them, if government fails to stop the illegal miners from encroaching their concessions.

‌Opera News also gathered that based on the Timber firm,s decision that pointed to the laying off of over 2000 workers and to curtail other social supports it offers to the people, the Sefwi Samereboi Concerned Youth Association have appealed to the government for its timely intervention.

‌According to the youth if the company's decision is put into reality and sacks over 2000 workers from their payroll the result would be that some of the boys will likely become armed robbers whilst the ladies counterparts would also turned into prostitutes to become another burden for the government.

‌The Sewfi Samereboi Concerned Youth Association said majority of the residents within the catchment area of the company depends on the firm to earn their living.

‌Therefore if by the reasons of the activities of the illegal miners, the company takes any harsh decision it would immensely affect the government.

‌   Hence their call on the 'power that be' to help curb the uncontrolled mining activities of some unscrupulous galamsey miners who are operating to satisfy their own interest.

‌ According to the Concern Sameraboi Youth Association the mining activities in the Wassa Amenfi West District have stretched into the forest reserves and plantations been manage by the Samatex Timber and Plywood Co.Ltd.

Stressing that the concerned residents of Sameraboi and its adjoining communities have also been showing concern as stakeholders of the company by calling on the government to act swiftly to save the situation.

At Aowin also a town in the Western Region where Samatex Timber firm's concession linked to, the youths confirmed the same story.

They said if care is not taken, Samatex company wouldn’t be able to render its services to the people because its resources are being tempered with by galamsey activities.

And that if that happens majority of the youths will be left with no job.

For this reasons the people of Wassa Amenfi West and Awoin are calling on the government and the Anti galamsey Task Force to take immediate action to curb this canker.

Some of the Aowin citizens boldly mentioned a Mining Company by name Akonta Mining Company Ltd as an alleged firm behind the illegal mining activities within the Samatex Company concessions.

Akonta Mining Company they alleged, have since three months ago been actively operating in gold mining business in the concessions of Samatex land.

Adding that for the past three months the firm, Akonta Mining Company has allegedly destroyed number of acreages of cocoa farms, other plantations and river bodies.

We believe that the President Nana Akuffo Addo is doing his best to solve this galamsey challenges and we are taking this opportunity to give him the tip off about what is happening here for action, the youth indicated.

Meanwhile the Member of Parliament for Tamale North Constituency, Hon Alhassan Suhuyini has alleged that the Minister of Lands and Natural Resources, Hon Abu Jinapor should be blamed for issuing exploration license to miners on prospecting missions on the Forest Reserves Areas in the country.

On the parliamentary floor recently, the Mp allegedly mentioned particularly Akonta Gold Mining Company as one of such miners Hon Abu Jinapor had given it a gold exploration license to mine on the Forest Reserves notably at Samereboi and Aowin where Samartex Timber operates.

Reacting to the MP's allegations about the activities of Akonta Mining Company on behalf of Hon Abu Jinapor Minister of Lands and Natural Resources through a press release dated August 17 2022 and signed by the Chief Executive Officer of the Minerals Commission Mr Martin K Ayisi, Minister Jinapor flatly denied the allegations.

The release said since the Minister assumed office in March 5 2021 he has not granted any prospecting license in a Forest Reserves to anyone and challenges anyone with a copy to come out.

The press release stated that in the case of the Akonta Mining Company, the company has applied for a prospecting license which is yet to be processed by the Mineral Commission.

Stressing that by a letter dated, August 8 2022/the Forestry Commission wrote to the Minerals Commission indicating that though it has in principle , no objection to the company's application, the application must be processed, subject to the Ministry of Lands directives on mining in the Forestry Reserves.

It may be interested to readers to note that any Ghanaian company is qualified to operate business when lawful and legitimate official documents are fully processed.

But in the case of the mining sector, before someone applies for either permit or exploration documents the company had already commenced business.

For the avoidance of doubts we produce elsewhere in the website Hon Jinapor's press release for attention.

Stop Eating These Foods Late At Night; It Can Affect Your Health Negatively

"This" Could Be A Life-Saving Information, 8 Early Symptoms Of Diabetes You Should Take Note Of