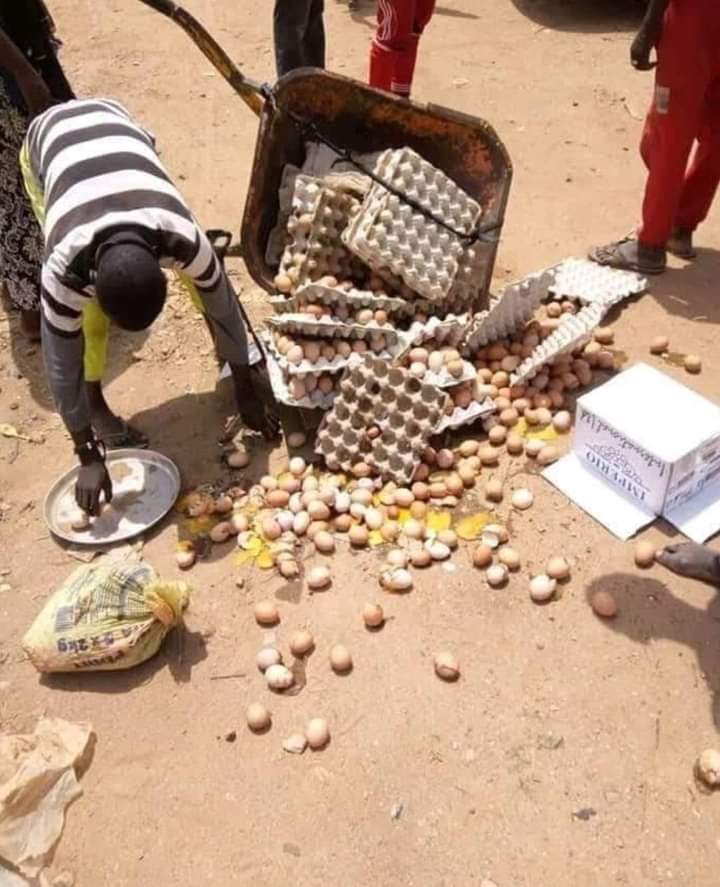 Sometimes we play too much with people's lives and that usually ends up with us, either hurting their business or hurting their finances. A 28-year old man has been apprehended by brothers of Veronica Apaw after he crashed the load he was supposed to deliver to Veronica's shop.

Veronica is a mother of three and a widow whose husband left her to the land of six feet in 2014. Ever since, Veronica relied on selling of pure water and ice Kenkey on the streets until she was able to feed herself and the children the man left her with. She was leased with a capital of GH¢1,200 from a Asante Akyem Rural Savings and Loans Limited, to start something small and take care of her children.

Guaranteed for Veronica on the loan was her brother Yamoah who promised the bank they will refund the money within two months after taking. Veronica started her egg business last month on the first and has been making progress. She is to pay the loan back next month on the 3 day of January 2021.

Veronica made her first sales last week and went to restock. Initially, she always carried the eggs herself in a headpan but she wasn't feeling well and decided to seek the help of a barrow pusher. A barrow pusher is a common helper which helps in transmitting lightweight bulky goods from one end to the other.

The pusher kept playing on the road whiles pushing the barrow full of eggs worth more than GH856. Veronica told him to relax but he kept saying he was fit to go. He was not under any drugs and neither was he under stress but concentrating on the road seemed to be his problem.

Veronica got a call and decided to stand somewhere from the scorching sun and listen to her call. All she could hear was a huge sound, she turned around from where she was standing and almost all the eggs has crashed. Yantoh, the barrow pusher said it wasn't his fault as he was trying to turn around to see where Veronica was since he couldn't hear any footsteps following him. He lost control of the barrow as he turned around and unfortunately for him, the eggs crashed.

Where Veronica will get the money for her to continue the business is even a problem. She has until 3 January to pay for the loan the bank gave her. It is the loan she uses for the egg business and now her life is in jeopardy as Yantoh has caused her a great deal of pain. Veronica said, Yantoh kept playing whiles pushing the barrow and she constantly remembered him, it was eggs not a bag of biscuits he was carrying. But anytime she remembered him, he will brush her off and say she liked talking.

Veronica's brother Yamoah who guaranteed for her sister to get the loan has vowed to skin Yantoh alive until he gives them the money for the damage caused. Yantoh is a street hassler who hassles with wheel barrow on the streets before he can get something to eat, and where he can get such money remains a mystery.

If Veronica doesn't get the money to continue her business, the bank will arrest her when they come for it in January. Yamoah said there is no hope for them anywhere and the only thing is to force Yantoh the barrow pusher to cough the money for them. Even he Yamoah is a Carpenter who hasn't been successful with finding contracts after the deadly illness came to Ghana.

The bank only gave him the loan for his sister because he has been saving at the bank for over a decade. 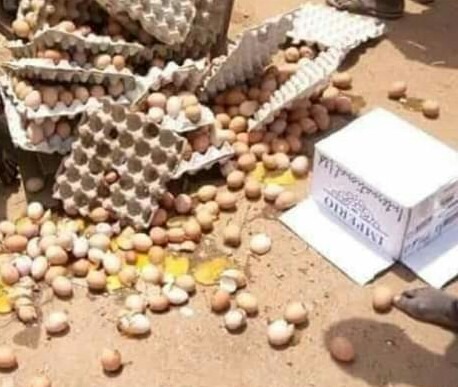