An officer of the Libyan armed forces, Gaddafi came to power during the 1969 coup, which overthrew the monarchy. It is immediately distinguished by a proactive policy aimed at achieving the objectives of social pan-Arabism.

Muammar Kadhafi born around 1942 in Qasr Abou Hadi (Italian Libya) and died on October 20, 2011 in the vicinity of Sirte (Libya), is a Libyan soldier and statesman.

During the capture of Tripoli by the rebels in August 2011, Muammar Gaddafi fled the capital. He was soon after captured, lynched and killed in the vicinity of Sirte.

From February 2011, his power, in place for more than 41 years, was threatened by a popular protest that repression quickly transformed into armed insurrection, then into civil war.

THE BENEFITS OF MOUAMMAR GADHAFI THAT LIBYANS REGRET! 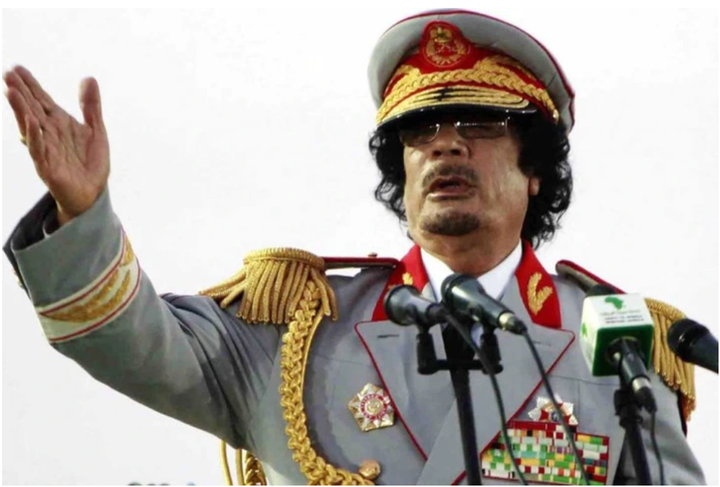 In what follows, we will introduce you to the benefits of the Libyan guide that Libyans regret.

4. The cost of living in Libya is much lower than that prevailing in France. For example, the price of half a baguette in France is around 0.60 Euros, while in Libya it is 0.11 Euros.

6. Citizens do not have to pay taxes, and VAT does not exist.

8. The price for the purchase of a car (Chevrolet, Toyota, Nissan, Mitsubishi, Peugeot, Renault.) Is at the factory price (cars imported from Japan, South Korea, China, United States).

10. Any graduate student receives the average salary for the profession of the chosen course if he cannot find a job.

11. For each student wishing to study abroad, the government allocates a scholarship of 1,627.11 Euros per month.

12. Each Libyan family, on presentation of the family record book, receives assistance of 300 EUROS per month.

13. When a couple gets married, the state pays for the first apartment or house.

14. For any employee in the public service, in case of necessary mobility through Libya, the state provides a car and a house free of charge. And some time later, these goods are his.

15. There are places called <Jamaiya>, where food products for large families are sold at half price, on presentation of the family booklet.

16. Any Libyan citizen who does not have housing can register with a state body, and he or she will be assigned one without paying any fees. , and without credit. The right to housing is fundamental in Libya. And a dwelling must belong to the person who occupies it.

17. In the public service, even if the person is absent for one or two days, no deduction of these days from his salary, and no proof of illness.

18. Concern for equality between men and women prevails, and women have access to important functions and positions of responsibility.

19. Any Libyan citizen wishing to do work in his house can register with a state body, and this work will be carried out free of charge by public works companies chosen by the state.

21. Each Libyan citizen can become actively involved in political life and in the management of public affairs, at local, regional and national levels, within the framework of a system of direct democracy (this goes from Basic popular congresses, permanent, up to the General People's Congress, the great national congress which meets once a year): out of 3.5 million adults, 600,000 citizens actively participate in political life.

23. Libya has 1,800 km of coastline on the Mediterranean and has one of the highest sunshine rates in the world.

24. There are subsidies on all basic foodstuffs (eg: a kg of pasta bought € 1 from a Tunisian producer, the Libyan government sells it € 0.50 to Libyans).

25. Secondary and university education are free. The literacy rate is over 90%.

26. Libya is the 6th or 7th sovereign financial fund in the world! Fiduciary reserves are greater than that of Russia, for example.

27. Libya participates ardently in the development of Africa, in its independence vis-à-vis the West and their dictatorial monetary system. It is more than 60 billion dollars that the Libyan state was ready to invest in 25 African countries and to give work to millions of Africans.

Do you think they can find a leader as good as ghadaffi again? share with others so that they can also express their opinions too