I Was Raised By Dwarfs For Five Years, And I Came Back With These Powers.

My name is Kofi, and I'm from Kumasi. When I was 19, I experienced the strangest event of my life. When this unusual incident occurred I was leaving with my aunt and her husband as my own parents had died when I was nine years old.

I said my goodbyes to my aunt and husband one day because I was going to school and they were going to the farm. On that day, I had a great time at school because I was able to complete and pass all of the tests that were given to us.

My aunt hasn't returned from the farm yet when I returned from school. I finished all of the housework I was expected to do such as fetching the water and sweeping the compound but at three o'clock and they still haven't returned. I became hungry and, since there was no food in the house I decided to go to the farm where I knew there would be some food.

So I started walking to the farm, which takes about an hour. And after walking for more than thirty minutes I became tired and hungry so I decided to take a break under a tree where I unfortunately fell asleep. I slept for far too long and when I awoke it was night and I was fully in the dark. As soon as I realised I was alone in the forest I began to panic and cry. Since I was a little off the main road my aunt must have passed me by without noticing me. I started to turn around and return home, but there was no light so I got lost in the woods and started crying. I then saw three people standing under a tree and quickly approached them asking for assistance. That's when I realised who they were.

They told us when I was a kid that there were some strange dwarfs hiding in the woods but we always thought it was a lie before I saw them. The dwarfs told me to come forward but I was so terrified that I couldn't move. They then told me to come again and I realised I was approaching them. Then I noticed something even more frightening their head was turned towards me while the rest of their body was turned away from me. When I got close to them they asked why I was alone in the forest and I told them why I was lost and they said they would help me but they would have to take me to their house because the forest was unsafe for me and then they would send me back the next morning. I wasn't sure but I didn't have a choice but to go along with them.

They led me deeper into the forest, where we passed through some bushes and I found myself in an entirely different place. There was no trace of the forest just a few mud buildings. They gave me some food and told me to go to sleep. I couldn't get to sleep at first but finally I did. When I awoke the next morning I asked them to take me back but they said that I would have to cook for them clean their house, and do some housework for them first. I told them that my aunt would be looking for me by now, but the dwarfs demanded that I do it or they would not take me back.

As a result I stayed and finished the work. And it turned out that they weren't planning on letting me go anytime soon as I ended up staying for one day one week and then two years. However, during my time with them they taught me some of their powers and I eventually became as powerful as they were. So after five years of getting lost in the forest and living with the dwarfs I was able to escape them and return home with powers they showed me.

When I finally got home I went straight to my aunty's house where I learned that she had fallen ill shortly after I went missing and had not yet recovered. Her husband told me that they had been searching for me for a long time but had not been able to find me. And I also told him everything and that I have powers that can heal my aunty. I went to her and found her on the bed, I took some water and said some words I gave it to her to drink and immediately she was well. 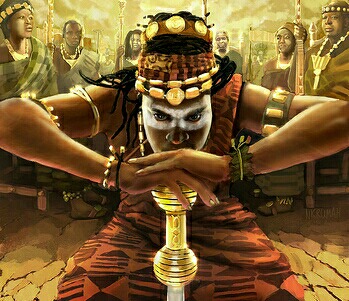 The news of my return and that I have special powers spread rapidly.