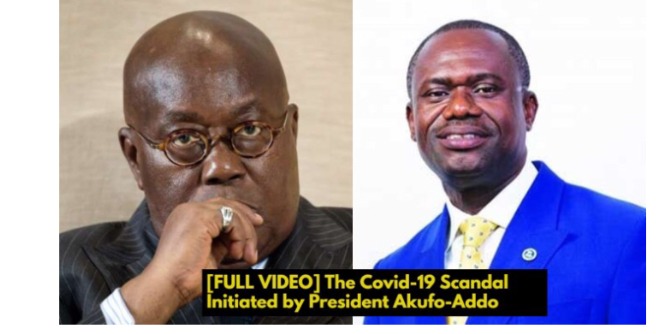 Ghana has resorted to going to the IMF for funding as the economy as at now needs urgently. The economical woes the country is attributed to the Russia Ukraine war and the coronavirus pandemic.

Reporting from the official twitter page of Manasseh Azure, one of Ghana’s top investigative journalists is a post he made some hours to enlighten Ghanaians about the claims of government stating that coronavirus has affected the economy. He stated that, “ If anyone tells you Covid-19 is responsible for our predicament, tell him or her it's a fat lie. They used Covid-19 as a conduit to loot. The looting was supervised by President Akufo-Addo. Here is solid evidence”. As part of the duties of his fourth estate organization, he and his team made a follow up on when government started to tackle the pandemic and this was their findings on which he stands on as evidence. 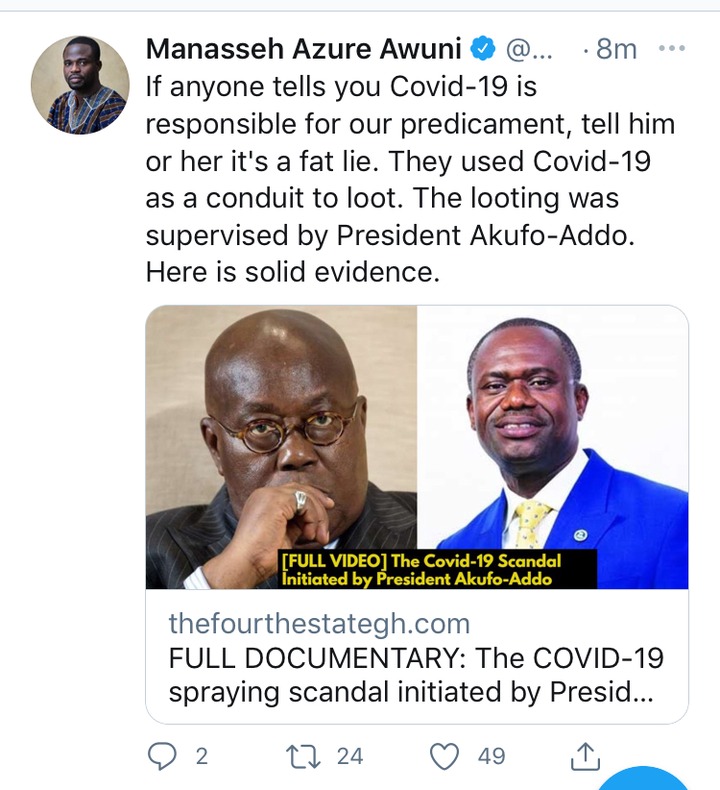 According to him, he personally wrote a letter to the Ministry of Local Government and Rural Development to request how much the ministry spent in undertaking the fumigation and disinfection of markets in order to curb the spread of Covid-19 for which he was given to be Ghc 76, 561,681.06 per phase. The exercise was in two phases hence amounted to Ghc 153,123,361.

The ministry then added that, there was a variation in the second phase for there was extra cost in including public toilets but the variation was not made available to him meanwhile the contract has been awarded a month ago before he requested for the above information.

Afterwards, the Minister of Finance, Mr. Ken Ofori-Atta, presented a supplementary budget to parliament on July 23, 2020, where he made it clear that, GHc122 million, has been spent for fumigation exercises across the country. The GHc 122 million the finance minister presented on was for only Phase One which does not tally with the information he got from the ministry earlier and the above figure is more than the two phases combined despite the said variation.

This evidence provided by Manasseh to support his post has left many stunned but as usual there were many who were criticizing his work. Find below some of the reactions I gathered from concerned citizens: 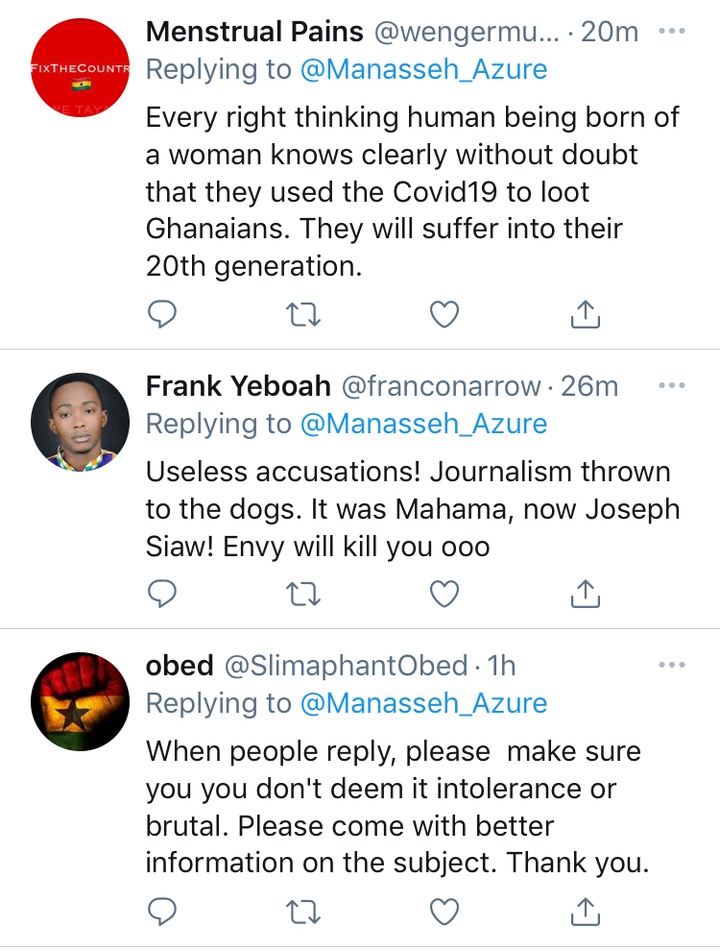 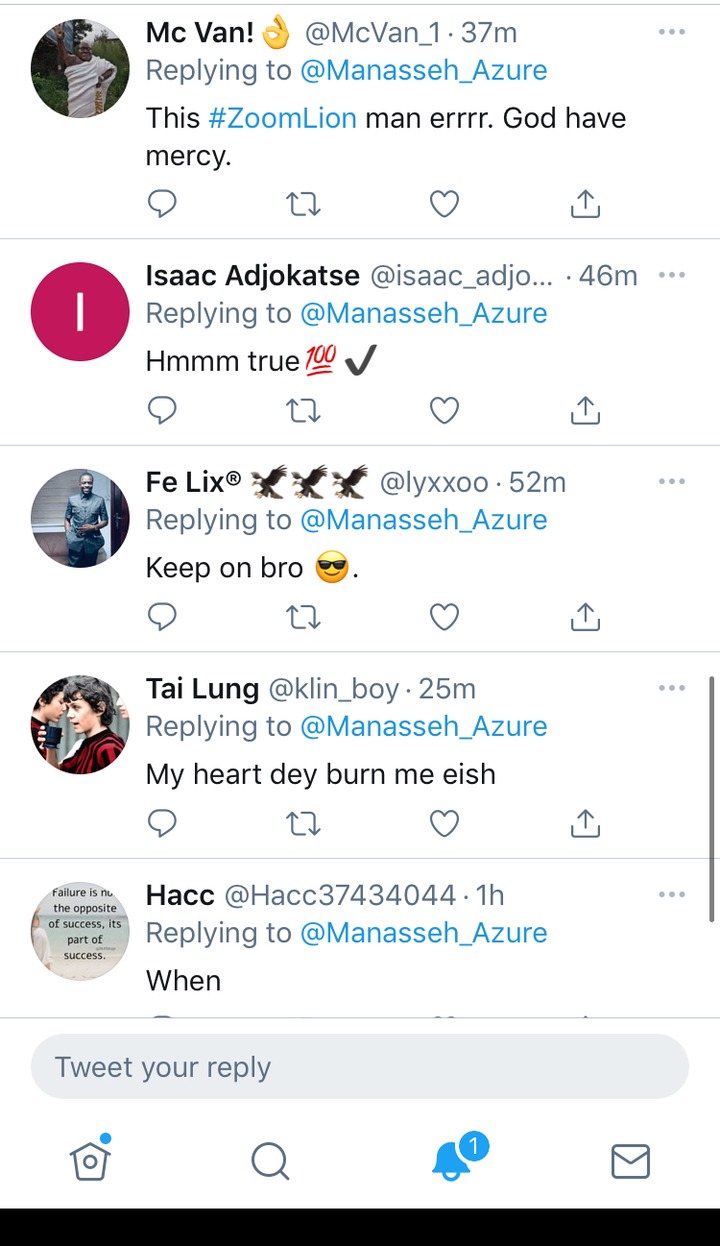 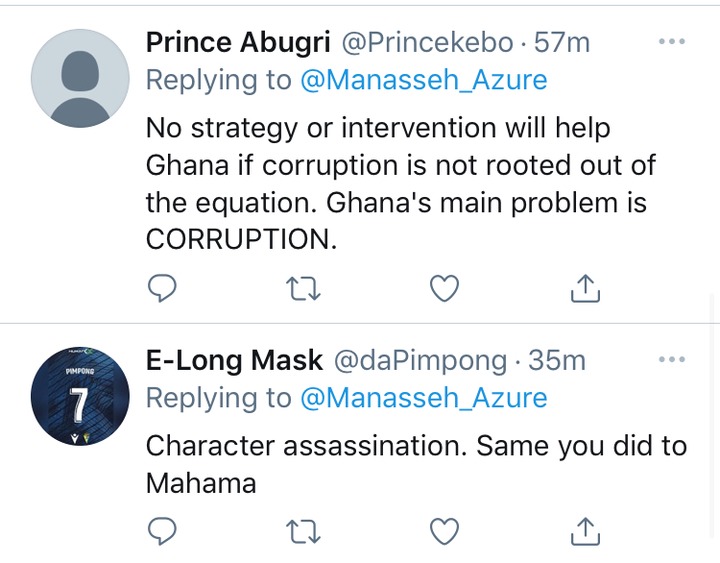 Watch via the provided link below the full documentary provided by Manasseh Azure:

Is the Nana Addo really honest to Ghanaians in their line of discharging their duties? Let your opinion be heard in the comments section below and do not be left out. Have a nice day!

Use these 7 silent treatments to teach your man a lesson.