Due to a lack of basic food supplies in the Adutwum-led education sector in the country, some secondary schools have been compelled to plan meals so that breakfast and lunch can be taken together, while other schools have decided to forego the breakfast completely. 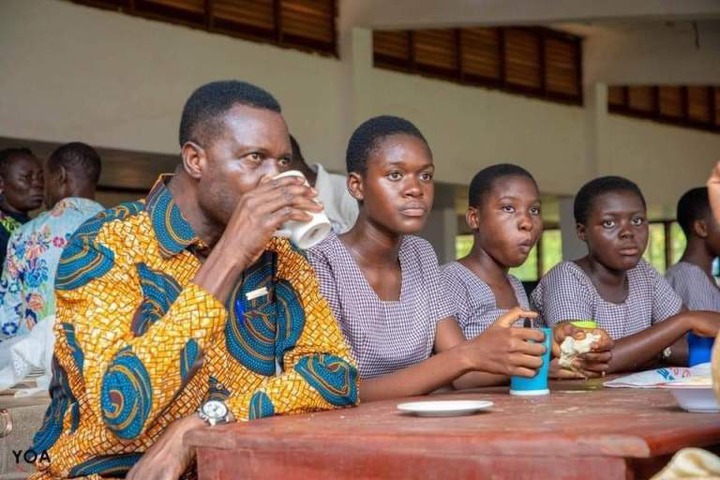 Since then, the sector minister has been spotted eating and drinking with students in their dining halls as part of his public relations effort at senior high schools.

Secondary schools have been impacted severely by a lack of flour, cooking oil, rice, beans, margarine, groundnut paste, and beans, among other things, due to debts that the ministry of education has not been able to settle.

Some funds released by the Ministry of Finance for Buffer Stock to clear some of its debts were instead used by the Education Ministry for textbooks, according to sources at the Buffer Stock Company.

Due to this, Buffer Stock is now in the red by around Ghc300million.

It appears that the food promised by the government has not been delivered to the schools as claimed.

Students who eat breakfast at school must bring their own sugar and bread to the dining hall, because neither is provided.

A kid at Mfantsipim School claims that the porridge supplied to them in the school is bland and light like water.

In response to this, another student commented, "Sometimes the quantity is small.

Even though the food situation was dire according to headmaster and reverend Rev. Ebenezer Aidoo, the school was working around the clock to fix it. Schools' food supplies have not improved since July 25.

In the morning, I avoid the dining hall since the porridge is very light and lacks bread. Sister media outlet quotes a Cape Coast student.

Henry Arthur-Gyan, St. Augustine's headmaster, similarly stated that the school had no choice but to deal with the crisis.

"We're aware of the difficulties, so we make due with the resources at our disposal. "There's nothing we can do," he said.

Ghc1,000 has been agreed upon by Wesley Girls administrators and parents in a meeting to ensure that their wards are well-fed with excellent and well-balanced meals in the wake of the food shortage.

Free SHS students at Cape Coast Senior High School are among those in Ghana who are suffering from food shortages because of an alleged lack of funding for the program. As a result, the Buffer Stock Company has also been unable to supply the schools with food.

Despite the fact that they were not compelled to pay, some parents informed this portal that school officials wanted them to keep the payment secret because the government could take action against the school if it came to light.

The majority of parents could afford it, according to another parent who thought it was too much to ask of those who couldn't. Another group of concerned parents feared that their children would be punished if they refused to pay or challenged the amount.

Akufo Addo plans to nominate more women and young people as MMDCEs, according to Kate Gyamfua.

A lack of bread, Mackerel and sugar, cooking oil and rice and wheat among other vital ingredients used in preparing dinner for the students prompted a meeting with the school's board of trustees.

Students at Wesley Girls SHS were stated to be in a desperate and deteriorating food condition where they had to go to the dining hall since it was mandatory, but they couldn't eat because of the food issue.

Wesley Girls isn't the only school in this situation, but it is the only one that has charged parents for food. No one knows if the others are doing the same.

A lack of food supplies was a major problem for most schools in the Ashanti region, according to the regional chairman of the Conference of Heads of Assisted Secondary Schools (CHASS), Rev. Fr. Stephen Owusu Sekyere.

The headmaster of the Opoku Ware School (OWASS), Rev. Fr. Sekyere, said that at times "students come to the dining hall with their own sugar. Despite this, we've been able to get by with what we have, and we'll continue to do so until the supply arrives.

In order to prevent students from protesting during my term, I sometimes have to buy some of the products from the open market myself," he remarked.